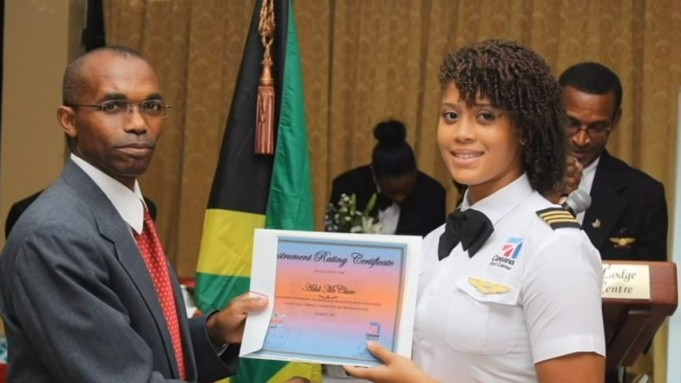 Jamaica’s Ashli McClure, 20, reached a major career milestone by successfully obtaining a commercial pilot’s license on February 19, 2016. McClure, who attended Charlemont High School, originally wanted be become a physician, but visiting a flight school at the age of 16 she decided to change her career path and become a pilot. Her mother then enrolled her in Ground School in 2012 to learn the theory required to take the written exams necessary to complete physical flight training. McClure received her private pilot’s license in 2012 from The Aviation Club Jamaica and began to accumulate the 200 flight hours needed to further her efforts toward obtaining a commercial license. Later on, she received the Multi-Engine Instrument Rating, which indicates the completion of a course teaching pilots how to fly a twin-engine craft in bad weather conditions without visual external references (VFR) in Class A airspace.