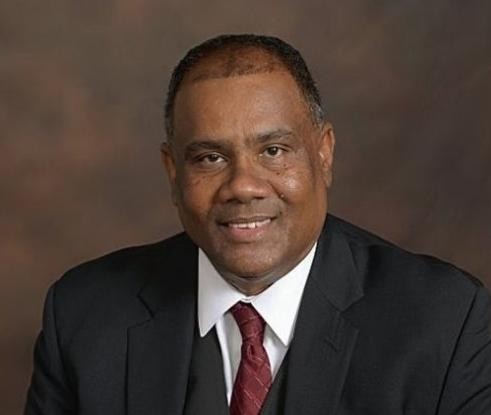 A healthcare entrepreneur, educator, and community development advocate, Dr. B. Roy Davidson is from the parish of Westmoreland, Jamaica. He is a graduate of Church Teachers’ College. He was awarded a Jamaican Commonwealth Scholarship in 1984 to Edith Cowan University in Perth, Western Australia. He was a senior teacher at Manning’s High School for eight years. He migrated to California in 1986 to join his college sweetheart Pauline.

He attended California State University, the University of Phoenix and Walden University earning a bachelor’s degree in Health and Physical Education, a master’s degree and a Doctorate in Business Administration/ Healthcare Management respectively. Dr. Davidson is past President, of the Jamaica Awareness Association of California. As President of JAAC, he and his executive board were instrumental in starting a Medical Mission to Jamaica and established computer technology learning centers in the Primary schools. He is Past President/Board Member of Caribbean Cricket Club and Senior Advisor to Jamaican Honorary Consul of Los Angeles.

As NAJASO’s seventh President 2009-2013, he and his Board of Directors introduced initiatives to streamline NAJASO into a vibrant, dynamic organization and was instrumental in the writing of the book “NAJASO-A Catalyst for Change.” He built a firm foundation with the Jamaica Diaspora Movement. If selected as the Advisor for the Diaspora Council, he will provide strong Leadership and be an advocate for the people of the USA West/Mid -West. He will empower the Organization Leaders and Jamaican American Nationals to continue to be part of the process of the development of Jamaica for us to achieve our 2030 Vision.

What is your connection to Jamaica?
Have you been involved in the Jamaica Diaspora Movement or Jamaican related organizations before? I was born and grown in Little London, Jamaica. I had the distinction of benefitting from Free Education in Jamaica from Primary School to College. I worked as a National Youth Service Teacher in the, Jamaica for the Advancement of Literacy Program (JAMAL), went to college and was fully Credentialled as a Teacher. I attended and taught at Little London and Manning’s’ High School for 8 Years and owned my own Sports Goods Store in Sav-La Mar. I am a Founding Member of the Star of the West Youth Club of Little London and is the Chairman of the Board/Founding Member for the Little London High School Past Students Association and Current Advisor to the Board of Directors of Manning’s and Little London High School. I have attended all the Diaspora Conferences held in Jamaica since its inception representing the National Association of Jamaican and Supportive Organizations (NAJASO). I migrated to California in 1986 to attend the University of Southern California and to Join my college sweetheart Pauline. Returned to Jamaica 57 Times for Vacation, Education and Medical Mission and Philanthropic work to give back to my beloved country. I am a Member of the Education Taskforce and the Crime and Intervention Taskforce.

If elected what will be your main goal in this role for your constituencies?
My main goal will be to Liaison with the Jamaican Nationals, Community Groups and Businesses to draw from their resources, concerns, and issues to share with the Minister of Foreign Affairs in order to better serve our community.

Many in the Jamaican community abroad don’t know much about the Jamaica Diaspora movement and its goals. What will you do to change this perception and get all Jamaicans in the Diaspora involved?
I will assist to develop a secured National Data Base of Jamaican Nationals in the West Mid -West. I will identify all the Jamaican American Organizations in the region and the Leadership of each Organization and appoint a Representative for each state. I will then utilize a Social Media Platform to disseminate information on the Jamaican Diaspora Council. I will work in collaboration with the Jamaican Honorary Councils, Council General and Ambassador in his region who are appointed by the Jamaican Government as the Representatives for the people to share information on the Diaspora Movement.

Recently there have been some who have expressed concerns about not having a voice and too much government involvement in the new The Global Jamaica Diaspora Council format that is being adopted. Do you have any thoughts on this?
I personally do not believe there are too much governmental involvement. We need the involvement of our government. The expansion of the Council is a great idea to involve more people in the process. Jamaican Nationals have been migrating to the United States for over 340 Years. As of to date we are not organized. I welcome the Novel idea of the expansion of the Jamaican Diaspora Movement to The Global Jamaica Diaspora Council. The Jamaican Diaspora is at least 5 Million Strong. Our Government is fully aware of the Power of the Jamaican Diaspora worldwide due to the advent of Technology. We need the Full Force and Power of our Government. We welcome the intervention and the need for a National Organized body to work for the Total development of Jamaica. As Jamaican Nationals abroad, we have the answer for the economic and social development of Jamaica. I will work to empower our people to be part of the process of the development of our country.

Is there a cohesive goal for the Jamaican Diaspora that people can rally around?
The Most important significant cohesive goal is the Power of our Money, Human Resource our Education and the Formation of Task Forces that we can rally around. For the Past 340 Years, Jamaican Americans have been involved in the development of the greatest Country on Earth the United States of America. Every significant change that was made in the USA Jamaicans have a part to play in it. In fact, Americans of Jamaican heritage own the unique distinction of having participated in all major US Conflicts related to national and international security interests, beginning with the American War of Independence1775-1783 to the Vietnam War (1955-1975) (Africanamericans.com, Ward, 2012)Book-NAJASO A CATALYST FOR CHANGE 2013-Muschette & Sanctioned by Binzie Roy Davidson, President of NAJASO 2013. I firmly believe that the Jamaican human capital abroad is very important for the development of Jamaica.

Thanks for your time and all the best in the election. Do you have any closing thoughts?
The Rationale here is if we can help to build the greatest country on earth, the USA, we can build JAMAICA. We in the Diaspora are the answer to Jamaica’s economic and social development. We are a country by ourselves. I believe that when we are ORGANIZED nothing can stop us.