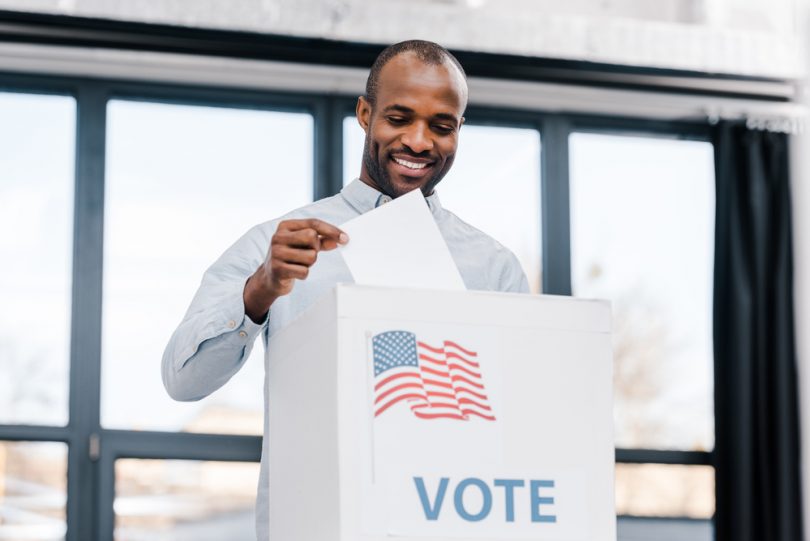 With the 2020 presidential election just a few weeks away, voter suppression and the COVID-19 pandemic are being used to prevent thousands of people from exercising their right to vote. Political activist Stacy Abrams noted the example of the primary election in Georgia on June 9, 2020, where long lines and nonfunctional voting machines created a “full-blown meltdown” in voting procedures.

Elections in the United States are rife with obstacles that are designed to suppress the votes of people of color, the disabled, and low-income neighborhoods. These tactics include voter identification laws, purges of voter registration lists, and poll closures. In general, Black voters must wait in line to vote 45 percent longer than white voters, while Latinx voters have a wait time that is 46 percent longer. States have attempted to enact voter identification policies that target Black people with “almost surgical precision,” according to a US Supreme Court opinion. By preventing people of color from voting, authorities believe they can prevent big changes from happening. In the face of continuing racism in the US, issues like police violence, inequality in health care, provision of affordable housing, and the school-to-prison pipeline begin at the local level and can be impacted by voting. According to Vanita Gupta, the CEO of The Leadership Conference of Human and Civil Rights, people at the local level have the “power to shrink the footprint of the criminal legal system and promote healthy and safe communities.”

Government officials in some areas are using the COVID-19 pandemic as an excuse to reduce the number of polling places in the US, which is one of the most blatant kinds of voter suppression, but all modern suppression methods have their historic precedents. Gupta noted that this political tradition has existed from the founding of the US and that “There has always been a very well-funded, focused effort to suppress the right to vote.”

In the elections of 2016, many Americans did not exercise their privilege to vote for the nation’s leaders in 2016. Census data indicates that only 61.4 percent of citizens eligible to vote did so. According to Colleen Shogan, the senior vice president of the White House Historical Association (WHHA) and the vice-chair of the Women’s Suffrage Centennial Commission, those who don’t vote don’t “really have an active say in the government that has been formed.” Voting is the most basic element for democracy, she added.

The 19th Amendment to the United States Constitution gave women the right to vote in 1920, and since 1965, the Voting Rights Act (VRA) protected voters from voter suppression tactics. These chiefly targeted Black voters and included things like literacy tests, intimidation, poll taxes, and violent actions. A ruling by the US Supreme Court in 2013 invalidated the portion of the law that required places with a history of voter discrimination to be “precleared” before enacting any new voting laws. According to Congressional Representative Terri Sewell of the 7th District in Alabama, since then, while no literacy tests or similar tactics have been imposed in these jurisdictions, other modern types of voter suppression have made it more difficult for many people to vote. The US House of Representatives has voted to restore these important protections of the Voting Rights Act as the Supreme Court did make provisions for Congress to pass a more current version of the law in its 2013 decision. The House bill has yet to be addressed by the US Senate, however.

Representative Sewell states that no one needs to be a lawyer or a legislator to make a difference in the country’s governance. “It’s all about ordinary people banding together to achieve extraordinary social change.”

1. Knowing local election dates and deadlines, paying special attention to dates required for early voting, and asking for an absentee ballot and voting by mail.

2. Double-checking voter-registration status to ensure that the name and address is up to date as some 17 million Americans were removed from voter rolls between 2016 and 2018, according to the Brennan Center for Justice.

3. If voting by mail, request the ballot immediately. About 76 percent of the US will be eligible for mail-in voting in 2020 due to the COVID-19 pandemic. Fill in the ballot and return it as soon as it is received as the US Post Office and boards of elections are pressured more than usual in the pandemic.

4. Consider working the polls because many typical poll workers are older than 61 and are at increased risk of getting coronavirus. Young people who are able should consider becoming poll workers on election day. Compensation for poll workers varies by location, but all do get paid.

6. If voting in person, stay in line. Come prepared for a long wait by bringing weather-appropriate gear, a folding chair, water, and snacks. Remember, voters who are still in line before the polls close have a right to vote regardless of how long it takes. If asked to leave or if other problems develop at a polling station, call the American Civil Liberties Union (ACLU) Election Protection Hotline at 1-866-OUR-VOTE.

Some other things voters can do to fight back against suppression efforts include getting educated about what they need to know to vote; making a specific plan to vote such as determining whether to vote in person or by mail if that is an option; being prepared to vote safely at polling places by being ready to protest bad practices if they see them; and most of all, by actually voting despite the efforts of authorities to make it seem that individuals are too poor, too disabled, or to Black to make a difference. Volunteers can also join with others to help saving voting rights through organizations such as Soca De Vote, Black Voters Matter Fund, Let America Vote, American Civil Liberties Union, League of Women Voters, Voto Latino, and NextGen America.