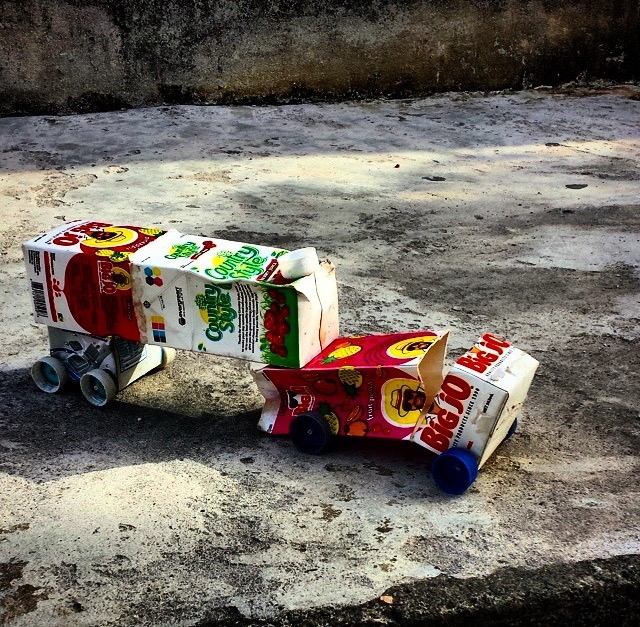 Kids nowadays have access to the latest Disney and Marvel toys but their parents and grandparents had to rely on their imagination and creativity for playtime. In doing so, they came up with many creative toys and games, learning coordination skills, teamwork and social interaction. Take a look at these eight self-made toys Jamaican children made.

Drink box car/truck
Juices that came in strong, square paper boxes were once very popular and children found all sorts of uses for them. The empty boxes were carved out to function as a truck, attached to bottle caps and even green limes used as makeshift wheels. The finished product was often adorned with colourful ribbons and paint, and was sturdy enough for many playful days in the yard.

Marbles
Playing with marbles was and still is a favourite pastime of many youngsters. Whether on the playground at school or in the middle of the street, many kids earned a sound beating for stealing away to play marbles with their friends. The game took some amount of skill to use your marble to hit the opponent’s one out of the circle drawn in the dirt. The winner would often gain possession of the loser’s marbles.

Hose hoop wheel with a Clothes-hanger wire guide
This consisted of a garden hose cut and fashioned into a large wheel resembling a hula hoop. A stick or sturdy wire was used to steer it along the street, the trick being to keep it upright and running for as far a distance as possible. In some rural areas, little boys can still be seen running alongside this peculiar contraption.

Pop-shot
This ingenious weapon was the reason behind many beatings for little Jamaican boys, not only for the creativity it took to fashion what turned out to be a dangerous weapon from an old radio or TV antenna and pear seed, or a hollow young bamboo shoot and apple seed.  After a brief hunt for a stick which fit perfectly into the bamboo opening, the seed would be pushed out with such force and at such a high rate of speed that it could cause serious pain to anyone it hit, not to mention take out an eye!

Kites
Spring and summer were always the best times for kite flying and Jamaican children took full advantage of that. These were fashioned sometimes from paper, scraps of cloth or cut up plastic bags with bamboo spines. Attached to the kite was long tails made from colourful cloth or plastic that made a sweet rustling sound in the breeze.  The whole thing was tied to a piece of cord usually stolen from mom’s crochet roll, with the aim of flying yours much higher than that of your friends while avoiding the tangle of trees and utility wires.

Paper planes
How many have destroyed nearly half a notebook just to make paper planes? For one, it didn’t take long to learn the technique, and once you did, you could fashion any number of air plane designs for endless hours of flying.

Bingy /Sling-shot
Also known as the catapult, this one needs few items to make and can be viewed as a toy or a weapon depending on who you ask. Most were made from strong Y-shaped branches cut to a handheld size and attached to a sling made out of rubber bands or even the inner rubber lining of a discarded bicycle wheel. A smooth stone formed the perfect weapon for the completed bingy. It was often used to shoot birds, knock down hard to reach fruit, or take aim at each other during play.

Bottle Stopper Zinger
This consists of a metal bottle cap that is hammered flat and dangerously sharpened. After boring two holes in the cap, a piece of cord is passed through the holes and spun in a wild rotating motion with the objective of cutting the other person’s cord. Of course, the implement was often sharp enough to leave cuts on the players before the game objective was achieved. But when has the risk of getting hurt ever stopped a child from playing?