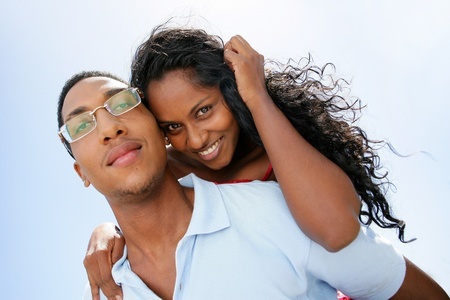 The kiss was the sweetest I had ever had in my life. I was on cloud nine.

“Now do you believe me?” she asked
“Yes”
I kissed her back as we entered my bedroom.

It was an amazing night. Mind blowing. Waking up in Nicola’ arms was amazing. It was like a dream. I know I had been irrational but I felt I could have proposed to her right there. She was wife material in all cases. This night proved it.

“I love you. do you love me?”
There was no hesitation, like my recent scenario with Rosa.

“Yes, I love you?”
I could drink her bath water the way I loved her.

I watched her go to sleep on my chest.

Nicola was still having car problems and I made myself available. I was at her beckon call. I spoke to the mechanic who was Jamaican about her car. I even had a strong discussion with him about how he was doing the job fixing her car. I think I became her hero after that. He started to work faster.

Her boyfriend realized what was going on. She told me he said, she spoke too much about me. Then he made a big mistake. He bought her a “promise” ring. She knew he did to to try and have her stop seeing me but she took it anyway. Then he started trying to control her. He would ask her where she was going and wanted her to check in with him on a mobile phone he got her. The control was too much. She kept talking to me about breaking up with him. Each time though she would not. He would do something sweet to make up for his jealous rages.

I was going through my own issues. Rosa kept calling to talk to me about her fiancé. He kept putting off the marriage date. We never spoke about the “quickie” we had but I think she was probing to see if we would get back together. Part of me wanted to cut off the communication but the other part of me wanted to have her around. She was my safety blanket. I still had feelings for her but Nicola was on my mind.

I was getting closer to Nicola and told her that I still cared for her and I would be waiting for her as a friend first, if she broke up with Richard. I told her I don’t want to be the “rebound” relationship. I was lying but knew it would “play” well with her.

It was a Wednesday and Nicola called to say she was breaking it off with Richard. I told her I didn’t believe her. Jokingly I said I will believe if she showed up at my door and gave me a big kiss. It was a dare. She was very adamant about her principles and if she did that.

We ended up in bed when Nicola showed up at my door and gave me the big kiss.

I looked over at her as she slept. I was extremely happy. She was finally mine. But there were still some loose ends. It was a happy moment and I was not sure why my mind wandered elsewhere. I guess my fear of losing what I just gained had me worried.

Did you hear the news.

About the president’s immigration bill.

“It did not pass in congress. it’s not going to happen. Apparently the congress and senate put roadblocks in him passing the bill.”

“What?” I was not following the bill as closely as I should because I was busy living my life. Everyone assumed it would pass.

Also, I knew there was a safety net as the president had an executive order that would stop all deportations of people who came here 16 and under. They were working on the details to registered immigrants who met that criteria.

That would still give me some relief I thought.

“Also a judge just blocked the president deportation order.”, Donesha stated. “This is not good”

There was a lawsuit by multiple states and everything had come to a halt.

The president had a few months left in office and the new president would have to take up his battle. If they do not care about immigration they could rescind the order that was in court.

Donesha went on to explain that the rape and killing of 3 women by a Latin American illegal alien turned the tide and that is why the bill failed.

I was devastated. I did not know what to do. I wasted all this time waiting on this. I could have tried looking for a wife. Now I have a girlfriend who was not looking to get married. I was back to “square one”.