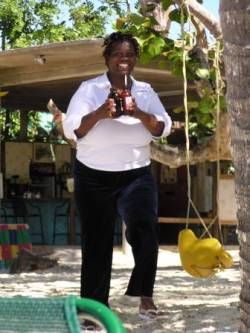 Nov 17th, the much anticipated departure date has finally arrived. We’re a group of 14 coming from St. Louis Missouri and 2 are joining us from Chicago. We range in age from 20 to 40. The kids, (my husband’s boys), are bringing their girlfriends who are ‘newbies’ and actually have never been out of the states before. Are they in for a surprise or what?! We have a couple other newbies on board this year, yet all are virgins to the Whistling Bird except my husband (Tim) and I.

A lady in the airport said next year we should have reality show tailing us, and she’s probably right. What a commotion we tended to make. It was all in fun though and lots of laughs. After a long day of travel, we’re finally on Jamaican soil, breathing the hot air outside, stripping off the winter clothes and waiting for Errol to pick us up. We have tons of luggage since I sent each couple with an extra bag chocked full of Ivan relief goods.

Errol greeted us with open arms and cold Stripes. We made the girls ride in the front seat so they could get the full effect. I get the biggest kick out of watching the newbies on the bus ride. I even heard them scream a few times. Due to airline delays there were a couple of guys on our bus ride who were total jerks, but we won’t even go there.

We pull up at the Bird and our Chicago friends are waiting in the street. We met them in Negril at our Wedding six years ago and have been very close friends ever since. As we stumbled off the bus, we run through the gates to our room then through the resort looking for our favorite familiar faces (leaving our children there to fend for themselves)!

At the Whistling Bird is an old Rastafarian carpenter Mendez who’s responsible for a lot of the woodwork around the resort. He is a piece of work himself. Paul was going to take his picture as he stood there working when ‘Mr M’ motioned for us to wait. Suddenly, he pulled the tarp off as if he were performing a magic trick and revealed the Bird sign. He stood there posing proudly.

First, there’s Bim. Bim is very special to us. I could do a whole report on him and him alone. Then there’s Lilly who has a heartwarming laugh that can be heard from one end of the resort to the other and

‘Ms G’ She’s been around forever and makes a mean rum punch. She plays the good old tunes like Barry White and Marvin Gaye when she’s at the bar. Great music for sunset!

Joseph usually does security and has hot blue mountain coffee ready for all the guests before the sun comes up. Last year he didn’t say much of anything, but this year he really came out of his shell! And there’s Natalie. She doesn’t work there anymore, but stopped by on occasion to visit with us. We can’t forget Turner, Snow and Damian the cooks who prepare some of the best meals I’ve ever had wherever, whatever and whenever you’re ready mon. Andrea basically runs the place and couldn’t be a more caring person.

Normally, I wouldn’t post a picture of friend doing something stupid in a drunken stupor, but there’s a story to it… Every year, the first night gets a little crazy and we enjoy ourselves at the bar more than one should. We weren’t there but 4 hours max and we had an injury. Our Chicago friend attempts to climb a palm tree, gets up there, flips around and can’t get down. Yes, it’s crazy. Yes, we warned him. No, he didn’t listen. We see Bim the next morning and asked him if he could find a cane for our injured friend. Within one hour, Mr. Mendez produced a crutch! Later he wrapped the arm piece in leather. It was perfect! Everyting, everytime. NO PROBLEM! Our friend is now humbled and mobile, yet not enough so as not to hurt himself again. The kids and the newbies are in awe. I just love hearing them talk and watching what they take pictures of.

We’re sitting enjoying the day as it turns to evening and there are a few local girls playing around us. I hear my husband say to them “Hey, who was that, who was singing?” The girls were laughing and one is pointing to the other saying “See, see, I told you…” She shyly replied that it was her singing and next thing I know she’s kneeling down wailing away on a tune that would have melted America. I looked at my newbie girls and saw tears in their eyes. It was a beautiful moment. Most of you have probably seen these two walking the beach over the years. Here’s another duo that brought tears and joy to the hearts of my newbie girls. They also got them to let loose into some of their “rap” songs with no holds barred. Very entertaining. When we got home Shaun, Tim’s youngest, had their CD playing for us. Got me right in the gut and brought me back 5000 miles in an instant.

More you say? So, I’ve become somewhat of an amateur bird watcher and I got a new digital camera. I walked the gardens everyday trying to get a good shot of a hummingbird. With no luck thus far, I asked good ole Bim. If anyone could produce a hummingbird for me, it was Bim. So, I’m walking back to the cottage from Breakfast and Bim comes running from the bushes somewhere hollering for me to come quick. We watched the birds and I snapped shot after shot of a male and female hummingbird as they chased each other around the tree. Next thing I know they wham, bam, smack into each other and lay on the ground still as can be. I asked Bim, “Are they dead?” He laughed out loud and said, “No, they’re having sex!” He said, “This is your lucky day, mon!” I tell ya, that man can do anything!

So, I’ve been bragging about Bim. Bim this, Bim that and rightfully so. I’m with Laurel; he’s one of a kind. One day, Bim says before the kids leave (they only stayed a week) he’s gonna build us a bon fire. And that he did. I took a shot of the fire being built. I love this picture, but it tugs at my heartstrings to see him work so hard in the hot sun just for us. It sure was a glorious sight at sunset. Indian-like. Later that night we see Bim walking in with a gas can – no questions asked… We all gathered around watching and waiting. He dumped the gas on the fire and in a line down the beach. Struck a match then BOOM, now that’s a fire! The story goes on…