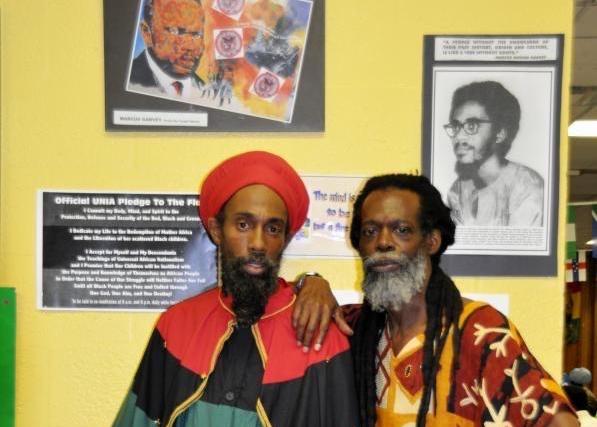 Priest Douglas Smith was born in and raised in Kingston, Jamaica. Currently, he is a leading Priest and a founding member of the Miami, Florida branch of the Ethiopia Africa Black International Congress. In addition, he is the President of the Rootz Foundation Inc., a Florida-based non-profit organization. Priest Douggie is also the author of the book The Philosophy & Opinions of the High Priest, a literary tribute to Bobo Ashanti founder King Emmanuel Charles Edwards.

I. Jabulani Tafari is a multimedia journalist, graphic artist, and managing editor of the Rootz Reggae & Kulcha Magazine. Tafari’s cultural approach to multimedia communications has earned him many accolades and awards over the years. He received the Ranny Williams Prize for Cultural Interest in 1981, becoming the first Rastafarian Journalist ever to win a national award from the Press Association of Jamaica. In addition, Tafari was named ‘Reggae Journalist of the Year’ (1984) by Rockers Magazine for his outstanding use of the broadcast and print media to promote Reggae music during the early 1980s.

GP: Rastafari in the 21st: What Life has Taught I&I, written by Priest Douglas Smith and I. Jabulani Tafari, uses the “non-traditional First Person idiom” I&I to tell the story of the emergence of Rastafari in Jamaica. In general, what does I&I mean, and specifically in the context of this book?

I&I: The Rastafari Elders referred to themselves individually as “I&I” instead of “me.” The term I&I (I-and-I) signifies an implicit and explicit oneness – the oneness between the individual I and the Almighty I within (the Most High Creator who people call God). Collectively, I&I signifies the oneness between man and man and woman and woman, whereas “you and I” connotes a separation and division between individuals. Priest Douggie and I-Jabulani are eyewitnesses and co-first person narrators of Rastafari in the 21st Century. Both speak with one voice throughout this literary work.

GP: What inspired I&I to write Rastafari in the 21st: What Life has Taught I&I.

I&I: Volume One was inspired by the fact that the Rastafari Elders are seemingly passing away into obscurity, and the people of Jamaica and the world are forgetting to pay tribute to those who endured so much social and political persecution and tribulation to establish a new cultural tradition and way of life for the descendants of the Africans who were enslaved in Jamaica. This book started as I&I literary tribute so that Jamaica and the world never forget the words and works of Rastafari Elders. Then, the book evolved into an account of the lessons in life that I&I learned from the life experiences of the Rastafari Elders.

GP: What are the three core ideas of Rastafari in the 21st: What Life has Taught I&I?

I&I: First, the Rastafari commitment to ‘Equal Rights and Justice’ for African/Black people, the redemption of Africa from all forms of neocolonialism and racism, and International Repatriation with Compensation (Reparations) are still at the top of the Rastafari socio-political agenda.

Finally, members of the African Rastafari family need to take a fresh look at where the Movement is coming from to determine where it needs to move forward. That means that Rastafari need to acquire a New Faculty of Overstanding (i.e., a new way of thinking) to redefine and codify the tenets and lifestyle of the Rastafari Culture, to upgrade the aims and objectives of the Rastafari Movement where necessary, and to be able to deal successfully with the collective challenges Rastafari face in the 21st century. GP: Many books have been written about Rastafari, most notably Dread: The Rastafarians of Jamaica by Joseph Owens and Rastafari: Roots and Ideology by Barry Chevannes. How is Rastafari in the 21st Century different from these other books?

I&I: Those books and most other books about Rastafari have been written by non-Rastafari authors. Some of them were foreign anthropologists and researchers, while others were academics studying Rastafari from the outside. Rastafari in the 21st Century is the inside story of the Movement written by two Rastafari brethren who sat at the feet of the original Rastafari Elders and heard them expound extensively about the origins of the Movement, about its arduous growth from the 1930s to the 1960s, and about its spiritual aims and socio-political objectives. Rastafari in the 21st Century is also the first publication to provide a precise chronology and detailed biographies of the Rastafari Patriarchs and Matriarchs.

GP: The divinity of his Majesty Emperor Haile Selassie I is one of the central tenets of Rastafari. What are the other central teachings of Rastafari?

I&I: Rastafari are exiled Hebrew Ethiopians (reincarnated Israelites). I&I know that Africa in general and Ethiopia specifically is the homeland/motherland of Rastafari; that Rastafari should be repatriated to the motherland with compensation (reparations); that Africa should be liberated from all vestiges of European colonialism and imperialism; that Marcus Garvey was the “Black Moses” and “John the Baptist” forerunner of Emperor Haile Selassie; and that the International Herb known as cannabis/marijuana and called ganja in Jamaica is a holy sacrament with spiritual properties as well as a therapeutic herbal medicine that Rastafari refer to as “The Healing of the Nations.”

GP: What were the main events that led Joseph Nathaniel Hibbert and Leonard Howell to “sight up” the divinity of Emperor Haile Selassie I?

I&I: The main event was the 1930 Grand Coronation in Addis Ababa of the former Ras Tafari Makonnen as Emperor Haile Selassie the First, with the royal titles of King of Kings, Lord of Lords, Conquering Lion of Judah. The coronation in the presence of diplomatic representatives of seventy-two different nations seemed to fulfill the prophecies/predictions found in the Bible, the Holy Piby, and the Royal Parchment Scroll of Black Supremacy as read and interpreted by Hibbert and Howell.

GP: The narrative refers to “Third Eye” realizations. What is the ‘Third Eye”?

I&I: Physiologically, the “Third Eye” is the pineal gland in the center of the human brain. It is a metaphysical organ that Rastafari say gives self-aware individuals conscious insight into the invisible spiritual dimensions beyond the three-dimensional physical world, especially when ganja is used to aid transcendence.

GP: What part did Marcus Garvey play in laying the foundations of Rastafari?

I&I: Marcus Garvey reportedly said that the people of Jamaica should look to Africa for the crowning of a Black King. For Rastafari, Emperor Haile Selassie I was that Black King. Marcus Garvey founded the Black Star Line shipping company and advocated the “Back-to-Africa” philosophy championed by the Rastafari. And Marcus Garvey was a Pan-African activist advocating for the liberation of Africa from colonialism and racism, a cause that the Rastafari have fully embraced. Thus, Rastafari regard Marcus Garvey as a visionary Prophet. 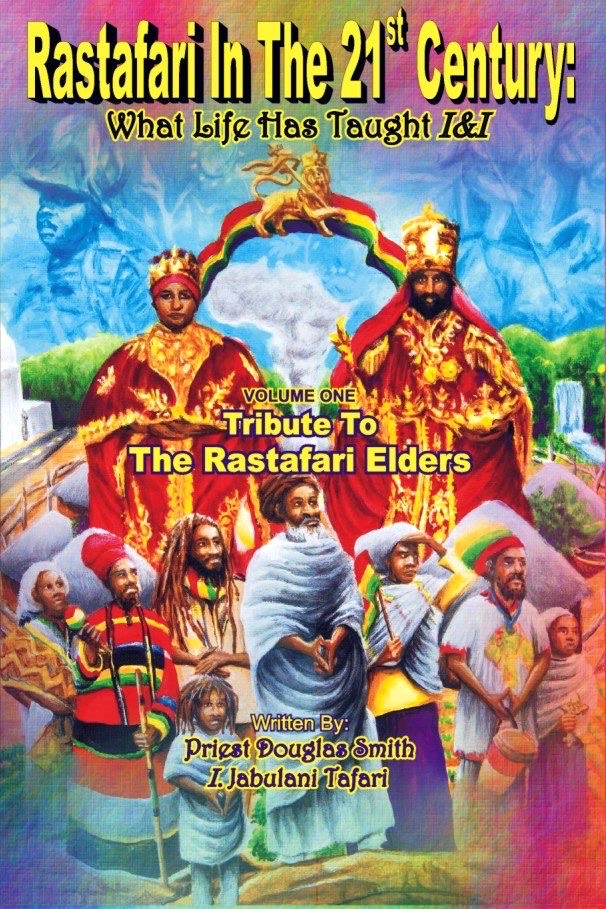 GP: Many other books about Rastafari have omitted the contribution of Rastafari matriarchs such as Sister Pearl Campbell, Ma Ashanti, and Barbara Blake Hannah. Why do you think it was necessary to include women in the history of Rastafari?

I&I: Although Rastafari is often accused of being a chauvinist male-dominated Movement, the sisterhood has played an essential and indispensable part in the growth and modern development of the Rastafari Movement. Additionally, gender equity – womanism, not feminism – in the Rastafari Movement has become a significant issue in the 21st century. Therefore, recognizing the role of Rastafari Matriarchs is the right thing to do.

GP: Should non-Rastafari readers be interested in the history of Rastafari and patriarchs such as King Emmanuel Charles Edward? Why?

I&I: Rastafari and its Elders have interacted with, influenced, and studied many other ethnicities, nationalities, and religions worldwide for decades. Also, there are universal lessons to be learned in the colorful life stories of the Rastafari Patriarchs and Matriarchs. So Rastafari history is intimately intertwined with Jamaican and world history.

GP: How can interested readers get a copy of Rastafari in the 21st Century?

I&I: If they Zelle $33 to [email protected] and email their name, street address, and telephone to the same address, I&I will mail them a copy directly.

About The Author
Geoffrey Philp is the author of the novel Garvey’s Ghost, five books of poetry, two collections of short stories, and three children’s books. Philp’s work is featured on The Poetry Rail at The Betsy –an homage to 12 writers that shaped Miami culture. He is currently working on a collection of poems, “Letter from Marcus Garvey,” and a graphic novel for children, “My Name is Marcus.”