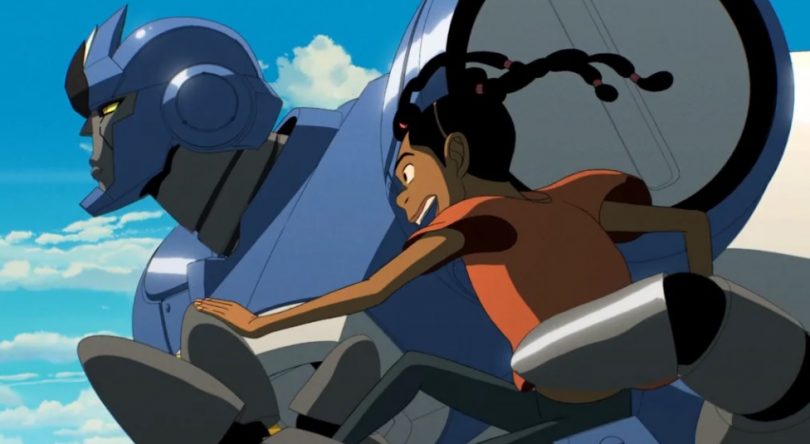 “The Mighty Grand Piton” is a short, anime-style film from the London based animation studio, The Line Animation. It ells the story of Connie, a young British girl who travels to St. Lucia in the Caribbean with her family during her school holidays. While on the island, she accidentally awakens a giant robot that has been buried under the Twin Piton mountains in the southern part of the country. While the robot seems to have the duty of protecting St. Lucia, his origins are cloaked in mystery, and no one knows where he came from or how long he has been buried under the mountains.

The film was created by Wesley Louis, whose mother and father were born in St. Lucia and migrated to the United Kingdom. The character of Connie is a combination of Louis’s nieces and nephews and also embodies his personal experience of visiting the Caribbean. The story of the robot giant refers to his memories of experiencing a culture and community that he had heard about during his childhood and what it was like seeing the island nation’s landscape, which was much different than the landscape he knew from his birthplace in London, for the first time.

Sam Taylor, James Duveen, and Tim McCourt its executive producers. The firm’s producers were Franzi Nicolaus and Hanae Seida. Wesley Louis was in charge if the character design and storyboards, while it was edited by Max Taylor. “The Mighty Grand Piton” song was written, composed and performed by Rina May. The film is dedicated to the memory of Agatha Charles, Francis Charles, Frederick Jn Baptiste, Philomene Louis. Barthelmy Louis. Constance (Connie) Prince. And No Ghost,