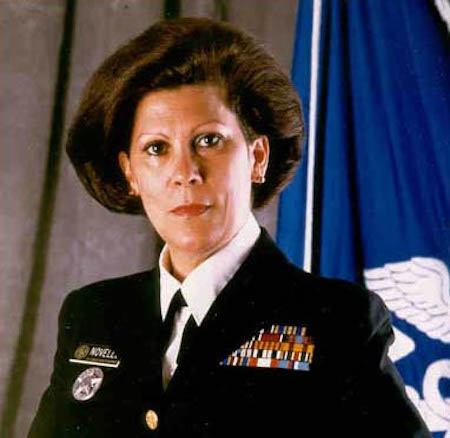 Dr. Antonia Novello, the first female Surgeon General of the United States, was born in Puerto Rico in 1944. She joined the Public Health Service in 1979 and worked in the Public Health Service Commissioned Corps. She was assigned first to serve as a project officer at the National Institutes of Health (NIH) National Institute of Arthritis, Metabolism and Digestive Diseases. She also had a clinical appointment in pediatrics at the School of Medicine at Georgetown University in 1976. She received a Master of Public Health degree from Johns Hopkins School of Hygiene and Public Health in 1982. Novello also served as Commissioner of Health for the State of New York from 1999 to 2006. She held several positions at NIH, including coordinator for AIDS research with a special interest in pediatric AIDS and made major contributions to the enactment of the Organ Transplantation Procurement Act of 1984 while on the US Senate Committee on Labor and Human Resources.

She was appointed Surgeon General by President George H. W. Bush and served from 1990 as the first woman and first Hispanic in the role. During her tenure, she focused on the health of women, children, and minorities and had a role in the launch of the Healthy Children Ready to Learn Initiative. Novello was also involved with other organizations that promoted child immunizations and childhood injury prevention. She supported a policy that prohibited workers in family planning programs that received federal funding from talking about abortion with their patients. After serving as Surgeon General, Novello stayed with the regular Public Health Service Corps and was UNICEF Special Representative for Health and Nutrition from 1993 to 1996. She was Visiting Professor of Health Policy and Management at Johns Hopkins in 1996. When she retired from the Service shortly afterward, she retained the grade of vice admiral. The Governor of New York George Pataki appointed her the state’s Commissioner of Health in 1999 and she served until pleading guilty in 2006 to using taxpayer funds for personal expenses. She served as vice president of Women and Children Health and Policy Affairs at Disney Children’s Hospital at Florida Hospital in Orlando, Florida, from 2008 and 2014. She retired from that position in 2014.