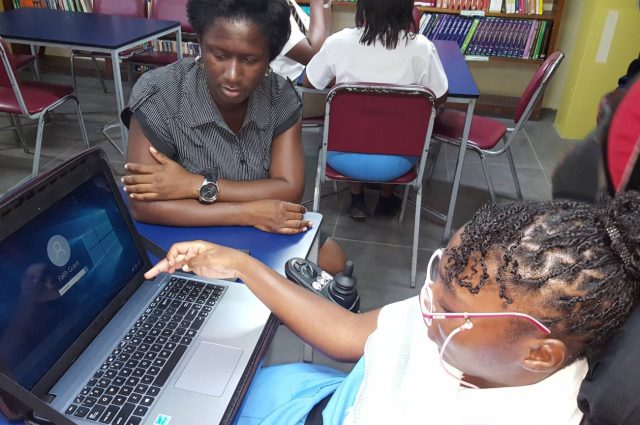 On realising that physically disabled student at Ardenne High School in Kingston, Faith Grant, would be unable to attend a class held only on one of the institution’s upper floors, the school’s administration promptly moved to solve the challenge.

Electronic Document Preparation and Management (EDPM), a Caribbean Secondary Education Certificate (CSEC) subject designed to equip students with clerical and administrative skills, was one of the eight subjects Faith selected when she started fourth form.

But being the school’s sole wheelchair-bound student placed her at a disadvantage as she was unable to attend classes in the designated rooms.

However, innovative thinking by the staff, headed by Principal, Nadine Malloy, has resulted in Faith now being able to participate with the other students via the video conferencing technology platform, Skype, which she accesses from the school’s library.

“A member of the team suggested that we do it by Skype; and we explored it and now we are happy that we did,” Ms. Malloy tells JIS News.

Recounting her decision to accept Faith as a student at Ardenne, Ms. Malloy says while acknowledging the anticipated challenges in doing so, the school was, nonetheless, willing to make the necessary adjustments to accommodate her.

“Some persons wondered if we were doing the right thing. But I am always up for a challenge and I indicated to the staff that I was going to try, which meant we were all going to try,” she states.

The Principal indicates that she researched cerebral palsy and had the staff consult with trained personnel on how best to relate to and teach students with the condition.

Consequent on this, Ms. Malloy says Faith’s presence at the school has helped students and staff to be more embracing of and sensitive to persons with disabilities.

“It teaches acceptance and it shows that some things that we are afraid of, we don’t need to be. It also shows that it is important for us to make the sacrifice and go the extra mile to ensure that each person, no matter their capacity, can self-actualise,” she adds.

The Principal is confident that Faith will evolve into a productive member of society because she has been given the opportunity to pursue her education.

When Faith was diagnosed with cerebral palsy as a young child, her mother, Susan Henry, purposed to provide her with as fulfilling a life as is possible.

Ms. Henry says she acknowledged that this would mean doing everything possible to provide her with the best educational opportunities.

She says it was on the advice of a therapist that she decided to have Faith enrolled in the mainstream school system, instead of a special needs institution.

Ms. Henry tells JIS News that she is happy with the decision taken and is very grateful for and appreciative of Ardenne’s kind gesture in going the extra mile over the years to accommodate Faith.

She says the teachers and students have been particularly helpful, adding that the administration has endeavoured to accommodate classes on the ground floor and install ramps for Faith’s benefit.

“Schools should really give physically-disabled children a chance, as long as they are able to function…on par with other children. We need to accept that persons with disabilities are humans (too) and they should not be discriminated against,” Ms. Henry contends.

She adds that, in so doing, “it also teaches the younger generation values of kindness and of being helpful, and sensitises them to the needs of the disabled community.”

Cerebral palsy is a disorder that affects muscle tone, movement, and motor skills. As the condition affects coordination, functions such as standing, breathing, bladder control, eating and talking can be affected.