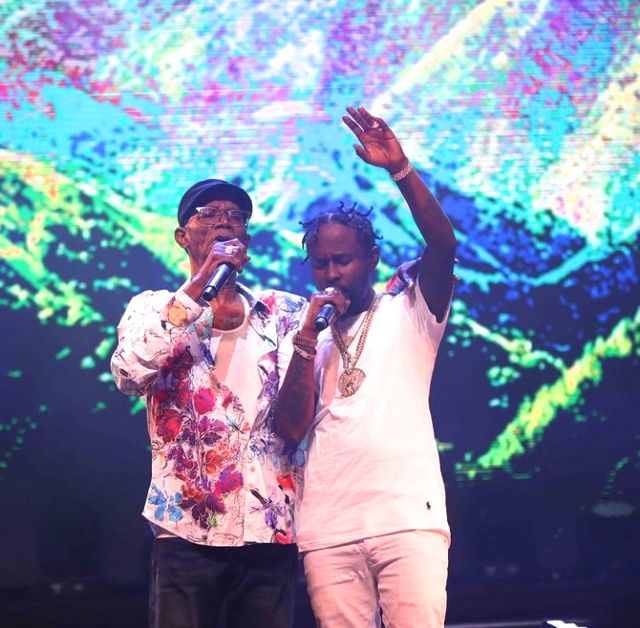 Living legend, Beres Hammond, embraced his legions of fans across the world on Sunday, February 28th with his much-welcomed virtual concert that also featured several of his closest musical friends in the reggae and dancehall industry.  Fittingly, titled—‘Love From a Distance’—the online show was definitely one for the ages.   The concert began at 9pm Eastern Standard Time and was live-streamed from the YouTube channel of the one and only VP Records.  Just the night before the matriarch of VP Records and co-founder, Patricia ‘Miss Pat’ Chin, was honored along with the iconic Third World Band at the 2nd Annual Icon Awards in the City of Miramar, Florida.

Beres Hammond opened his show with his signature ear-to-ear grin and playful demeanor.   As it happened, the concert certainly went over well with the masses as the concurrent audience tallied over 100,000 viewers.   At that, the show posted the largest live-streaming attendance numbers from the VP Records’ YouTube channel—while also hitting the # 2 Trending position on YouTube’s LIVE page.  Other social media platforms, such as Twitter, also reflected a high-level of social media engagement with Beres trending # 8 on the night of his well-rounded show.   And all for good reason, as Beres Hammond is one of the most loved reggae musicians not only in his home country of Jamaica, but across the globe as well.  Arguably, his vault of hits is deep and unrivaled—especially where ‘Lovers Rock’ reggae is concerned.  Hammond’s eagerness to unleash his timeless classics was very discernable, particularly since it had been roughly two years since he has been off the touring circuit.  And of course, the last 12 months in the grips of the ongoing COVID-19 pandemic has been a disrupting factor as well to the touring plans of not only Beres, but also for artists in general across practically all music genres. 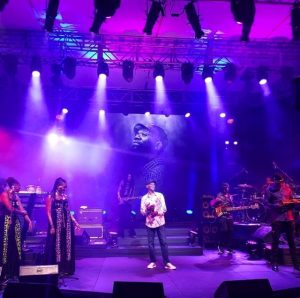 The chosen timing of Beres to hold his virtual concert on February 28th was perfect, since the last day of February in 2021 marked the end of both Reggae Month as well as Black History Month.   In that spirit, Hammond leapt at the opportunity to connect with his fans who he dearly missed according to the video he posted on his Instagram page in the run-up to the actual show.  And his hit song titled, ‘Love From A Distance’, transferred well as the name for Sunday’s show—particularly with the pandemic impeding the close contact features of a traditional in-person concert.

Hammond surely quenched the thirst of his virtual concert fans in quick order by uncorking a number of his gems, including:  ‘Come Back Home’, ‘Rock Away’, ‘Step Aside’, ‘What One Dance Can Do’, ‘Sweet Lies’, ‘Groovy Little Thing’, ‘Full Attention’, ‘She Loves Me Now’, ‘Double Trouble’, ‘I Feel Good’, and ‘Putting Up A Resistance’.  The stage set up for Beres’ virtual performance had in the background, a screen filled with squares that showed the concert attendees in a frenzy.  The ante was upped even further when the gruff voice of his long-time partner in music, Buju Banton, bellowed out before he actually appeared on stage to ‘shell down di place’.   And so, off went Beres and Buju into their hit parade of collaborations that included, ‘Can You Play Some More/Pull-It-Up’, ‘Just a Little More Time’, and ‘Falling In Love All Over Again’.  When it came to ‘Falling In Love All Over Again’, Buju interjected and said:  “Beres, you’re not going to get away this time.”  Beres retorted: “Mi nah look fi get weh”.  Buju then signaled for Beres to deejay Buju’s part of the song, and Beres hilariously obliged as he belted out in his rendition of Buju’s deep, coarse voice tone:  “Who she dat big man don’t cry…you neva seek di water til di well run dry!”  Meanwhile, Buju was prancing around the stage with gleeful delight while doing knee-lifts as Beres deejayed his part of the classic tune.  Needless to say, that was a marvelous moment of the virtual concert.  That is, to see Buju and Beres together again on stage and rekindling their remarkable synergy in regard to making and performing top quality reggae and dancehall music.

Born Mark Myrie in the gritty Kingston community of Salt Lane, Buju Banton rose to prominence in the 1990s with a mountain of infectious hits that garnered him the moniker, ‘Mr. Mention’, which was also the title of one of his most successful albums.  In fact, Buju’s ‘Mr. Mention’ album eclipsed the record for # 1 singles in Jamaica, previously held by the King of Reggae, Bob Marley.  Buju’s career then continued to steadily progress to the point where he was widely regarded as one of the most significant and influential reggae artists in the Jamaican music industry as well worldwide.    And during that time, Buju of course collaborated with many top-notch artists in the reggae, dancehall, and hip-hop genres.   From a reggae music industry vantage point, legends like Beres Hammond, Wayne Wonder, Cocoa Tea and the late Garnett Silk come to mind in terms of the great songs they recorded with Buju Banton.

Beres was then joined on stage by Marcia Griffiths, who came alongside to perform ‘Live On’—the smash-hit duet that the pair recorded together.   With her career now stretching into its fourth decade, Marcia Griffiths famously toured the globe as a member of Bob Marley’s iconic I-Three background harmony group– along with co-members, Rita Marley and Judy Mowatt.  Mort than that, the Most Honorable Marcia Griffiths was also the one who masterminded and sang the Billboard smash hit in the 1980s, ‘Electric Boogie’–complemented, of course, by the smooth and rhythmic ‘Electric Slide’ dance move that seemingly took the world by storm. 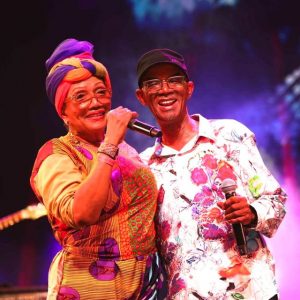 Stepping forward next, was the dancehall star, Popcaan, who has been tearing up the industry in recent years with ‘a bag of tunes’ that have made their imprint not only in Jamaica, but also worldwide.  Hammond and Popcaan doled out their yet-to-be-released track ‘God Is Love’.  In so doing, the pair exhibited palpable chemistry as Popcaan traversed the stage—seemingly from corner to corner.  And prior to kicking-off their joint performance, it was great to hear Popcaan’s reverence of Beres in his own words:  “mi haffi say salute to a living legend…salute, love.”  Without a doubt, Popcaan’s heartfelt sentiments echoed those of Beres Hammond’s endearing fans whose spirits certainly received a much-needed boost as the COVID-19 pandemic continues to wear on.  And needless to say, a big round of applause to the living legend, Beres Hammond, for showing us all ‘Love From A Distance’ and doing what he does best.  Cheers! 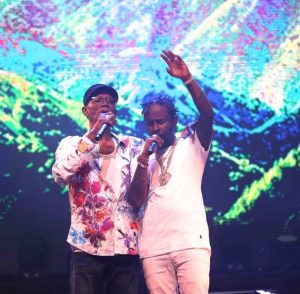