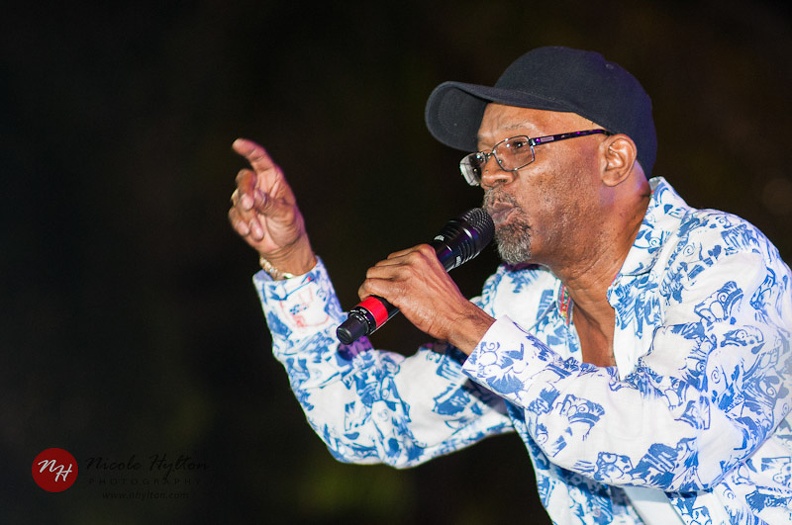 Memorial Day marks the beginning of summer in the USA and on Memorial Sunday 2014, downtown Miami truly was HOT! The area was swarmed by thousands of party goers from out of town, down for Urban Beach Weekend on South Beach. They, along with South Florida reggae and soca aficionados, packed Bayfront Park where a huge stage with an even bigger screen in back, held some of the great talents of the day.

Walking into the park through the security gates at 4:00PM as the show was about to start, the venue had clearly already begun to fill up fast. The food vendors were stocked, the chicken was grilling and the mango was sweet. On stage, the DJs entertained the heat stroked crowd with the requisite island role call. Of course, the Jamaicans were out in force and were the loudest of the bunch. They played a rousing set of 90s hits from Buju anthems to songs on the Pepper Seed rhythm.

The fashions weren’t too outlandish. In fact the typical colorful hair was the most notable style trend of the day, along with the red, green and gold garb that goes hand in hand with reggae culture. For the ladies, even the ones on stage, a notable part of the challenge was the sweltering heat that had makeup and hair not cooperating with their intended fabulousness. But no one seemed to care.

Some lesser known artists like Edwin Yearwood, The Bahamas Rat Pack and Popeye Caution touched the stage with lukewarm response from the crowd. Then came Jamaica’s Tifa who thrilled the growing but still relatively small audience with a little dancehall, a little wining and her signature young diva style. The set breaks were far too long but the DJs kept the crowd on their feet. Moving on, DJ Barry Hype took the stage to introduce the audience to the soca contingent. As expected, every flag of every color was waving in the air. Destra had everyone “Jumping” and “Calling her name”. When Bunji performed Differentology you could tell that the whole audience was “Ready for the Road”.

On to the reggae set, Etana stepped forward in a beautiful red, green and gold custom created dress that gave her the look of a reggae queen. She thrilled the crowd with hits like “When a Man Love A Woman”, “Wrong Address” and “I Am Not Afraid”. Singing Melody with the help of Ruff Kut Band delivered sweet love songs like “Let It Flow” and “Say What”, ending his set with his biggest hit “Want You Back” – and the ladies loved it. Veteran artist Cocoa Tea came out like a youngster and had the whole crowd moving to classic tunes like “She Loves Me Now” and “Holy Mount Zion”. When Barrington Levy said whooooooaaa, the audience sang right along. Of course, everyone knew every word to songs like “Too Experienced”, “Living Dangerously”, Under Mi Sensi”, “My Time (I Deserve the Right to Live)” and “Broader Than Broadway”. By the time the emcee called Beres’ name, there was not a quiet spot in the venue. People were on their feet and enjoying his familiar raspy voice crooning “Confrontation”, “Putting Up a Resistance”, “No Disturb Sign”, “One Dance”, “I Feel Good” and so much more.

Although the visuals were stunning with the big screen showing beautiful, sweeping shots of the stage and artists, and the production of the show was awesome, as usual the disappointment came because the entire proceedings ran behind schedule. Tarrus Riley, Chronixx, Assassin and Beenie Man closed the show out to a packed audience but with shorter sets than the audience would have liked. All in all, it was a beautiful day, and a concert that went off without incident. I’d say this one is Jamaicans approved!

See More Photos in our Best of Best 2014 Gallery

About the Writer
Calibe Thompson is a Jamaican-born entertainer, producer and TV personality. She is the host and producer of The Caribbean Diaspora Weekly TV show , the producer of Taste the Islands with Chef Irie  and various other news, commentary and entertainment broadcasts for the Caribbean diaspora and people who love Caribbean culture. Follow her on facebook at http://www.facebook.com/misscalibe or on twitter @calibe.