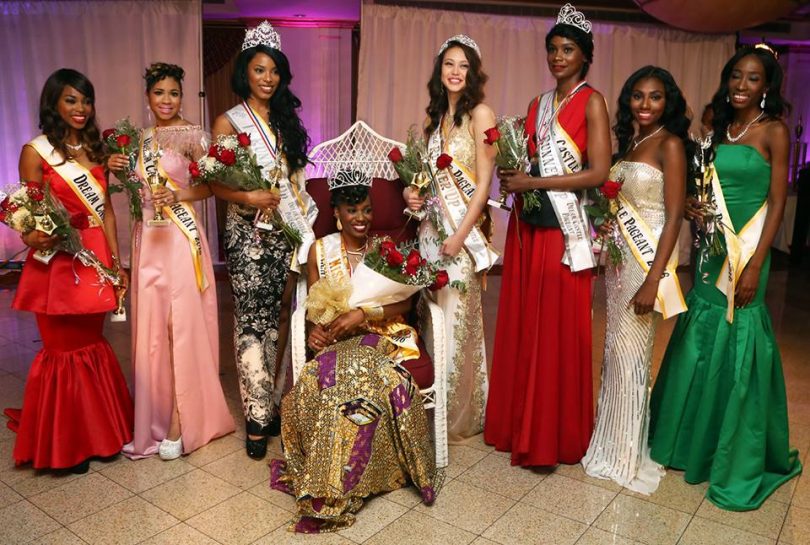 Some would say that beauty pageants had their hey-day in the 70s and 80s, but judging from the media coverage of the recent giant snafu by Steve Harvey in making an announcement of the wrong winner, beauty pageants are still interesting to a large section of the population.

Gwen Nicks-James, affectionately called Lady Gwen is a firm believer in pageants, not just as an arbiter of beauty, but as a way to influence and encourage young ladies to believe in themselves and their inner beauty – not just the one on show.

The 7th staging of the Miss Dream Castle Pageant took place on Saturday June 18 at the Royal Regency Hotel in Yonkers. A whole ballroom was given over to the affair, which was well attended. Once proceedings were up and running, host Barry G performed his duties, his unmistakable voice reminding many of his days on radio in Jamaica.

Eight young ladies lined up to delight and entertain before being whittled down to the eventual winner of the coveted prize. The first introduction had them wearing black bodysuits under diaphanous purple sarongs, paying tribute to Prince who tragically died in April, by dancing to “Kiss”. The talent section was refreshing in its diversity. A singer, three spoken word performers, a stepper, a gymnast and two praise dancers – each contestant rendered an uplifting and positive spin on their performance. Judges Chris Daniele, Karen Durgana, Howard Smith, Lyndon Taylor and Judy Taylor, watched keenly as the evening gown section unfolded with some eye catching creations courtesy of Designers D’Marsh and Sasha. The ladies were poised and confident answering questions and striding out in their stilettos with no mishaps.

In a surprising and totally unexpected move, Lady Gwen’s son Mark Williams took to the dance floor and, at the prompting of Barry G, proposed to Rebecca, who thankfully accepted his offer. Photo ops and tears then followed as the contestants no doubt anxiously awaited the resumption of the contest.

Featured performer – Salome kept things moving during the intermissions, a seasoned performer, although this was her first time in New York, she handled her task like a pro – even garnering a standing ovation at the end of her very engaging set which included her take on the Temptations classic ‘My Girl’. Anaya Williams, Lady Gwen’s daughter also got in on the action with her version of “Hello” by British crooner Adele. Tinga Stewart delivered an abbreviated selection from his vast catalogue – “Nowhere no Better than Yard”, “Cover Me” and a wonderful version of Al Green’s “How Do You Mend a Broken Heart”.

Anticipation was building, not only to hear the winner of the contest, but also to see the Delfonics Review, featuring Greg Hill – just when the wait seemed interminable, Barry G was announcing the group who trooped out dressed in identical red and black suits and matching shoes! Watching them perform was a balm for the nostalgic, as they flawlessly delivered a selection of their classic hits like Lonely Girl, Special Lady and, in a poignant gesture – crooning For the Love I Give to the contestants while handing out long-stemmed roses to each, and a few lucky females in the audience. At long last, the wait was over and it was time to announce the winners: The Queen flanked by runner ups