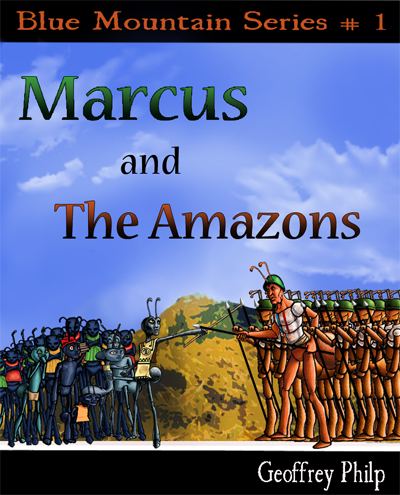 Geoffrey Philp is a Jamaican writer who resides in South Florida, and his latest publication titled Marcus and the Amazons is a children’s book brimming with rich allegorical references to the Caribbean and indeed to the postcolonial world’s legacy of enslavement and oppression. However, despite its subject matter, Marcus and the Amazons has the delight, intrigue, and appeal of traditional children’s fiction.

Philp is author of numerous books of poetry and fiction, including another children’s book, Grandpa Sydney’s Anancy Stories, and his most recent poetry collection, Dub Wise. Philp is also a prominent member of the Caribbean literary community, which he keeps regularly informed about literary events, news, and publications from across the Caribbean diaspora via his popular blog, Geoffrey Philp’s Blog Spot: http://geoffreyphilp.blogspot.com/. Philp teaches English at Miami Dade College and is the chairperson of the College Prep Department at the North Campus.

Marcus and the Amazons is Philp’s first electronic publication, a children’s book that is a cross between a picture book and a chapter book, suitable for ages 6 to 10. The characters are familiar yet unique, their desires and fears, their bravery and cowardice, recognizable within a historical framework, but also recognizable within the context of traditional fairytales.

The story’s hero is Marcus, a courageous young Formica ant who has returned to his homeland to take a stand against the oppressive Amazon ants, who have enslaved his family and friends and abducted Amy, his beloved bride to be. Relying on new ideas he’s encountered while away as well as the power of community organizing, Marcus mounts a resistance to the Amazons.

The story makes obvious allusions to real life dissidents in various black nationalist and civil rights movements during the twentieth century. The main character’s name evokes Jamaican national hero Marcus Garvey, and the circumstances of the character Marcus’ enslavement suggests any number of (post)colonial moments of disenfranchisement and brutality. Yet Philp manages to shape a story that engages the imagination of both the young and young at heart.
For example, Marcus and the Amazons is peopled by an array of anthropomorphic characters, mainly ants portrayed with human characteristics, but also other creatures such as fireflies and spiders. The story features betrayal; a villainous contingency of Amazon ants, including the queen and her general; and the rescue of the fair maiden in distress. These characteristics make it easy to immediately dive into Marcus and the Amazons because of the familiar fictional territory in which the story is set. However, Philp manages to negotiate an effective conversation with an important and often ignored topic in children’s literature, enslavement and colonization, because of the painful history in which those occurrences are rooted.

Philp’s new book does an excellent job of providing a literary venue for children to learn a little about the oppression endemic to the postcolonial experience while holding their breath to see what happens next and being entertained. Furthermore, the images are a delightful characteristic of Philp’s book. Illustrated by Patrick Pollack, a young artist and family friend of Philp’s, Marcus and the Amazons boasts beautifully drawn images with vivid colors and memorably rendered characters.
Congrats to both Philp and Pollack for this valuable contribution to the Caribbean canon of children’s literature.

About the Author:
Jamaican author and popular blogger, Geoffrey Philp, has authored children’s books, novels, two collections of short stories and five poetry collections.  His work has appeared in the Oxford Book of Caribbean Short Stories and the Oxford Book of Caribbean Verse. Geoffrey has also won many awards for his poetry and fiction, including a Florida Individual Artist Fellowship, Sauza “Stay Pure” Award, James Michener Fellowships from the University of Miami, and in 2008, he won the coveted “Outstanding Writer” prize from the Jamaica Cultural Development Commission. Geoffrey lives in Miami and teaches English and creative writing at Miami Dade College. His blog is located at http://geoffreyphilp.blogspot.com

Where to buy the book:
Marcus and the Amazons is available for download from multiple venues, including popular booksellers like Amazon and Barnes and Nobles, as well as from the Smashwords website.