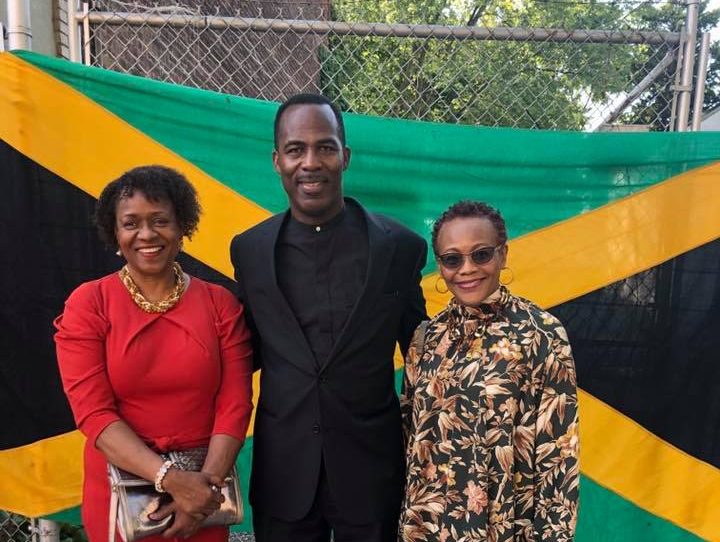 History was made in the North-East Bronx with a street co-naming ceremony which took place on Saturday September 28 2019  at the busy intersection of Light Street and Dyre Avenue in close proximity to the bustling #5 IRT subway station. The street co-naming idea was the brainchild of Sadie Campbell, President of The Jamaica Progressive League Inc., (The League), who, along with a dedicated membership, sent the renaming proposal to the New York City Council.

Councilman Andy King from the 12th Councilmatic district, under whose jurisdiction the designated area falls, promptly responded to the request and worked diligently with the League to bring the idea to a successful conclusion.

President Campbell’s pride at seeing the street sign unveiled was palpable and clearly mirrored in the hearts and minds of those witnessing the momentous event.

The League was founded in Harlem New York on September 1, 1936, and 83 years later, has not wavered from the mission of its founders, W. Adolphe Roberts, W.A. Domingo and Rev. Egbert Etheldred Brown – continuing to champion the cause of immigrants.  One major accomplishment was its advocacy in getting the Immigration and Nationality Act of 1965 passed into law. This law abolished the National Origins formula which had been the basis of United States immigration policy since the 1920’s. In Jamaica the League advocated for the right for universal adult suffrage and self-government for the people of Jamaica. 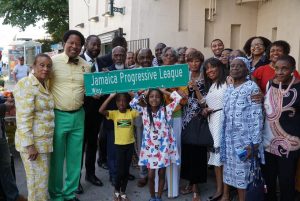 Due to the organization’s insistence on uniting and uplifting Jamaicans in the diaspora, the communities in which Jamaicans reside have developed tremendously. The League’s impact was recognized by the city agencies by their tribute in co-naming the intersection of Light Street and Dyre Ave, Jamaica Progressive League Way

Present at the street co-naming ceremony: NY State Assembly Speaker Carl Heastie, Jamaal Bailey, Senator for the 36th District of the New York Senate and Councilmember Andy King, completed the triumvirate of politicians who have provided support and assistance to the League under the leadership of the current President.  President Emeritus Karl Rodney, New York Carib News Publisher and his wife Fay Rodney, Mount Vernon Councilmember Delia Farquharson, Author Andrene Bonner,  Attorney Hugh Campbell together with, local clergy, media, League members and wellwishers and curious passersby were all on hand to witness the well-deserved recognition. 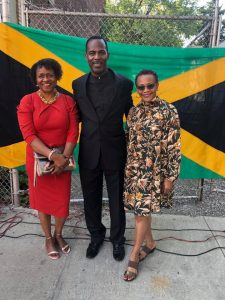 Dr. Jermaine McCalpin, Chair of African American Studies New Jersey City University, gave a rousing and thought provoking address pointing the way for a continuum of the League with steps to promote succession from one generation to the next.  His comments urging ‘no mining in Cockpit Country,  received a standing ovation, showing that the Diaspora is well aware of the current hot button topic concerning whether or not, mining in what is considered by many as sacrosanct lands, should be sanctioned by the Government and others, against the wishes of a growing dissenting group.

The function held in the second floor Crystal Room at Eastwood Manor had some patrons gingerly negotiating the stairs, but at the end of the day there were smiles all around and satisfaction for a well put together and uplifting event which saw patrons showing off their African dance skills as well as musical prowess on various percussion instruments.  Other noted organizations in attendance were Union of Jamaica Alumni Association (UJAA) represented by president Lesleyann Samuels, and the Hartford Chapter of the Jamaica Progressive League, led by President Caswell Sewell.