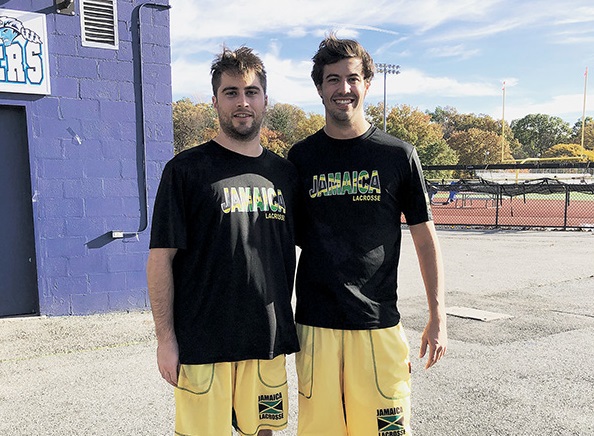 Rob and Alex Kelly have the chance to take their athletic dreams to the next level by competing on the international stage at the FIL World Lacrosse Championships in Netanya, Israel, in the summer of 2018. The brothers will headline Jamaica’s National Team.

According to Alex, 23, he didn’t know if he would even make the high school varsity team when he chose lacrosse as his sport and preparing to compete at the global level now is “a dream come true.”

The brothers claim Jamaican citizenship from their mother, who was born on the island and then relocated to the United Kingdom where she met her husband Kevin Kelly. The family ultimately moved to New Jersey and settled in Rumson, where the brothers attended Rumson-Fair Haven Regional High School. Thanks to their mother’s national pride, however, they always felt close to their Jamaican roots. The boys go to Jamaica almost every year.

Rob, 26, graduated from high school in 2010 after three seasons playing on the varsity team. He then played with the University of Richmond’ club team. His mother helped put the team together, organizing players and coaches and raising funds. She basically started a small firm in the name of Jamaica lacrosse, Rob said.

In 2017, Rob traveled to the Caribbean and spent a week training and coaching Jamaican children with Kevin Dugan, formerly of Christian Brothers Academy and current executive director of the nonprofit Fields of Growth, which focuses on promoting lacrosse via international leadership development and positive social impact.

Dugan was excited by the fact that Rob’s mother was Jamaican and that he had a brother who also played the game. This is the first time a Jamaican team has participated in international lacrosse competition, so the brothers feel some responsibility to perform well, Alex said.

The Kelly brothers and their Jamaican teammates will make their appearance in one of the most anticipated matches of the international tournament when the National Team plays the host country Israel in the opening event on July 22, 2018.