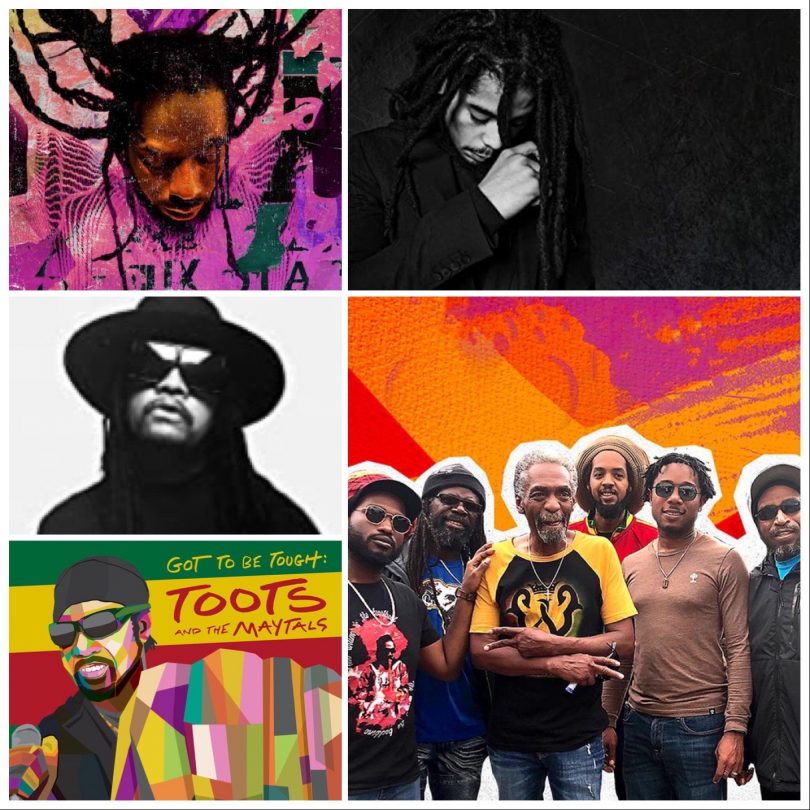 Competition for the Best Reggae Album Grammy award is stiff in 2020. The nominees are Buju Banton for his album “Upside Down 2020,” Skip Marley for “Higher Place,” Maxi Priest for “It All Comes Back to Love,” Toots & The Maytals “Got to Be Tough,” and The Wailers for “One World.”

Buju Banton’s “Upside Down 2020” album is his first full-length recording since December 2018 when he was released from prison after serving seven years in the United States on federal drug charges. Featured on the album are John Legend, Pharrell, Stephen Marley, and Stefflon Don. The album has 20 tracks “because it’s 2020,” Buju told an interviewer, and the year resonates for him “with a clear vision and seeing things for what it is.” He also said he wanted to compensate for his ten-year absence by giving fans music “for that missing time.”

Skip Marley’s 7-track project, “Higher Place” was recorded as a “call to action” to his fans, his generation, and listeners at large and is meant to inspire people to reach for a higher place of consciousness and love. The project includes new concepts as well as the wisdom passed down through the Marley family that Skip calls “Marley Mantras.” Released via Tuff Gong/Island Records, in features Rick Ross and Ari Lennox, and the songs “Slow Down” and “Make Me Feel.” Skip made history with “Slow Down” featuring H.E.R. when it hit the top spot on Billboard’s Adult R&B chart in 2020 as it was the first time a Jamaican-born artist had achieved that ranking.

The new Maxi Priest album “It All Comes Back to Love” was released in August 2020 and was produced by Shaggy. It features Anthony Hamilton, Estelle, Bounty Killer, Inner Circle, and more. His unique vision has brought him considerable success, and he is the first reggae artist to have a Number 1 hit worldwide. He is also the first British-born singer to graduate from the Saxon Studio International reggae sound system in London, introducing the lovers’ rock genre to an international audience. Prior to joining Saxon, he became a follower of Rastafari beliefs, and throughout his career has followed the principles of his faith in making his music.

“Got to Be Tough” from Toots & The Maytals features the last performances of Frederick “Toots” Hibbert, who died at age 77 in 2020. For much of his long music career, Toots sang about being resilient in hard times, and this last album continues that tradition and was inspired by an event at a concert in 2013 when a bottle was thrown at a concert and put the artist out of commission for a time. Commenting on the event at age 77, Toots said he had to “get the job done” and went on to produce, arrange, and write all but one of the songs on the album. He also plays several instruments on the recording. The theme he covers are serious: “Just Brutal” highlights the days of slavery, and “Drop Off Head, “Struggle and Stand Accused, focus on wrongful censure. He also includes a version of Bob Marley’s “Three Little Birds” that features an intense and squealing guitar.

The Wailers brand has a long history in reggae and continues to thrive and grow, even without the legendary Bob Marley as the group’s central figure. The group’s legacy continues in various forms now that OM Bunny Livingston Wailer is the only singer from the original trio still living. He passed the torch to Asadenaki, his son, who brought “The Wailers Trio” into existence with “Blvk H3ro” and “Written.” The Wailers Band continued after Marley’s death in 1981 headed by brothers Aston Francis “Family Man” Barrett und Carlton Lloyd “Carly” Barrett. “One World” with its 14 tracks and 12 new songs comes nearly 26 years after the group’s last studio album “Jah Message.” It is produced and co-written by Emilio Estefan, a 19-time Grammy award winner, and features his Latin-influences and those of Aston Barrett Jr., son of the legendary bass-player “Family Man.” The album showcases the talents of all those involved and moves away from The Wailers’ usual catalog but offers a promising view of what may come in future tours.

The Grammy Awards ceremony will take under restrictions imposed by the COVID-19 pandemic on January 31, 2020. It will be emceed by Trevor Noah, the comedian and talk show host. Below is the list of all 2021 Grammy nominations.