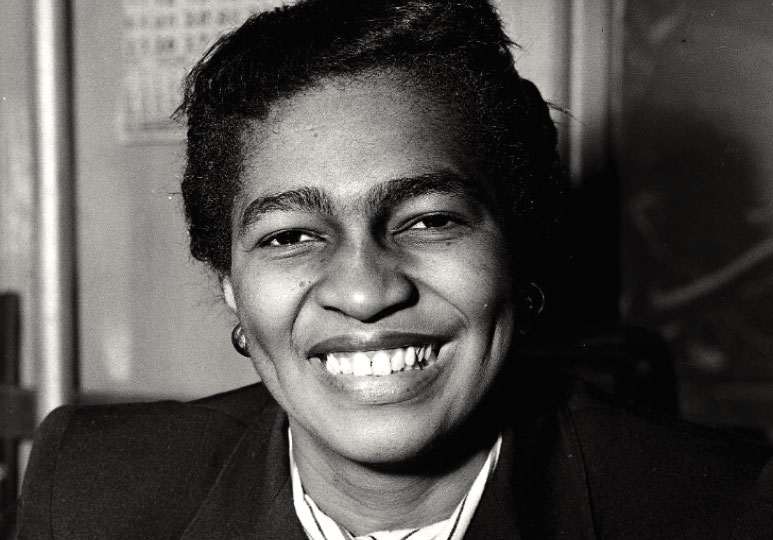 Journalist and activist Claudia Jones was born in Trinidad and Tobago, which was still a colony of the British Empire, in 1915. At age eight, she migrated with her family to Harlem in New York City. Her mother died when she was 13. Jones won the Theodore Roosevelt Award for Good Citizenship during her junior high school years. She contracted tuberculosis in 1932 at age 17 due to the living conditions in Harlem. The disease caused severe damage to her lungs, which resulted in long hospital stays throughout her life. Although she graduated from high school, her family could not afford to attend the graduation ceremony. Her status as an immigrant woman limited her career choices, and rather than attend college, she started work in a laundry and then found retail positions in Harlem. She joined a drama group and began to write a column called “Claudia Comments” for a Harlem newspaper. She joined the Young Communist League in 1936 in support of the Party’s defense of the Scottsboro Boys and worked on the group’s newspaper.

Jones later became the organization’s state education director and chair. Her writings included support for emancipation for women. She was arrested many times and imprisoned for “un-American activities in 1950 and released in 1955, but was refused entry to Trinidad and Tobago and so went to the United Kingdom, where she joined the Communist Party of Great Britain. She found support in the growing British African-Caribbean community and organized programs for access to basic facilities and equal rights. She founded the first major Black newspaper in the UK, the West Indian Gazette in 1958. She was focused on expanding the Party’s support for Black and White women, campaigning for job training, equal pay, government controls on food prices, and funding for wartime childcare. She had a leading role in the founding of the Notting Hill Carnival in 1958, the second-largest annual carnival in the world. Jones died at the age of 49 in 1964 on Christmas Eve.