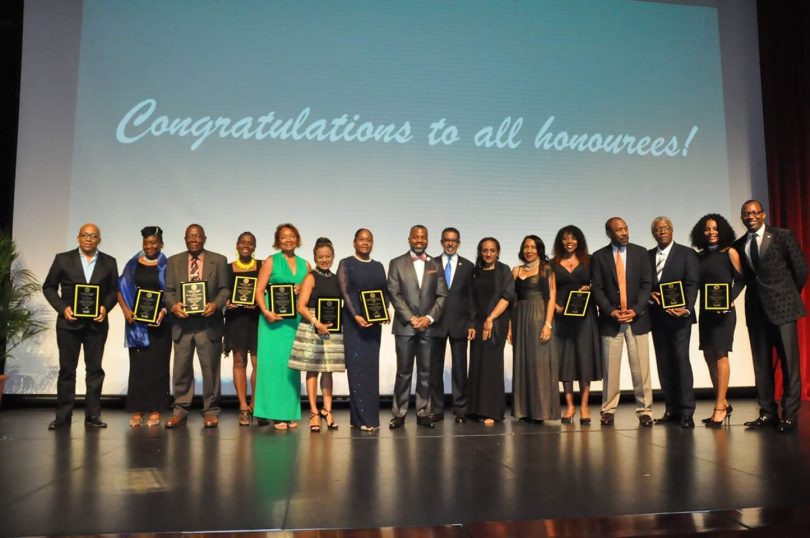 Ten deserving nationals of the Jamaican Diaspora across the Southern United States were recipients of the Consulate General of Jamaica, Miami, Diaspora Honours at the Awards Ceremony and Reception held last Saturday (Oct. 28) at the Sunrise Civic Center, Sunrise, Florida. The event was continued celebration of Jamaica’s 55th Anniversary of Independence.

The awards were presented in the category of Luminaries including a Diaspora community organization, and one as Special Community Award. The names of the honorees will be inscribed on the Honour Roll of Jamaicans in the Southern United States of America.

The Atlanta Jamaica Association (AJA) which is celebrating 40 years as a community association was awarded for Outstanding Community Group. The Special Community Honour was presented to Dr. Malou Harrison, President of the Miami Dade College (MDC), North Campus and Inter-American Campuses.

Presenting the awards, Jamaica’s Consul General Franz Hall, commended the recipients for their outstanding contributions in the various areas of support across the Diaspora and in Jamaica. He acknowledged the many other deserving individuals and community groups who have remained committed to Jamaica’s national development as well as support to the Diaspora communities in which they resided.

The Awards Ceremony and Reception was sponsored by the Victoria Mutual Building Society (VMBS), the Jamaica Tourist Board (JTB). The Academy of Neurosurgical Physicians, Inc. and the Thelma Gibson Health Institute (tghi).

The presentation of the awards continues the tradition of recognizing Jamaicans in the Diaspora who have positively impacted their community. According to Consul General Hall “recognizing members of the Jamaican Diaspora for their indelible contributions to community development takes on a special significance this year, as the theme of Independence is “Celebrating Jamaicans at home and abroad” Extending congratulations, Mr. Hall also congratulated the recent honorees of Jamaica’s National Honours some of whom were present at the Awards ceremony. These persons were recently presented by the Governor General on Jamaica National Heroes’ Day (Monday, Oct. 16) at King’s House.

Based on approved criteria, a Jamaica Diaspora Honours Selection Committee evaluated and approved the final selection of awardees from the large number of exemplary nominations received. These awardees will now join the outstanding changemakers, luminaries and vanguards who were previously recognized and who continue to render significant service to enhance the positive image of Jamaicans at home and in the Diaspora. Previous recipients of the honor can be accessed on the Consulate General’s website at: http://jamaicacgmiami.org/uploads/pdfiles/jcglistofhonorees.pdf

Since 2007, the Consulate General of Jamaica at Miami has recognized individuals who have had a significant impact on the Jamaican Community in Florida and the South Eastern USA. These persons have contributed tangibly to community enrichment and to positive representation of Jamaica in the USA. Their commitment to community service have inspired and motivated others. Each year, the Consulate General issues a call for nominations and appoints a selection committee to review the nominations that have been submitted with a view to making the final selections. The categories in which persons can be nominated include, but are not limited to, education, religious leadership, community development, social services and philanthropy, business and entrepreneurship, healthcare, the arts and entertainment, media, sports, and law and justice.