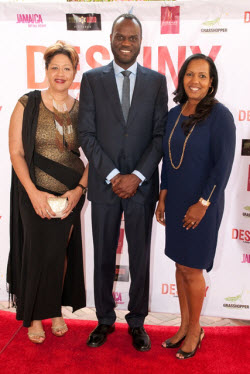 At the VIP reception, sponsored by the Jamaica Tourist Board, Vice Mayor Colbourne congratulated Grasshopper Production’s CEO, Producer/Director of “Destiny”, Jeremy Whittaker for the production and bringing the film to Florida for its premiere. In reply, Whittaker stated that the response received from the diaspora was overwhelming and premiering to a sold out audience spoke volumes for the future of Jamaican films and also provided a good indication of the support the film should receive when it opens across the U.S in the coming weeks.

With an on time 8pm start “Destiny” hit the screen to loud cheers and applauses, as the movie took the audience members on a nostalgic ride with picturesque scenes of Jamaica highlighted by familiar sights such as, an Air Jamaica aircraft landing at the Palisadoes Airport. As the movie continued, the audience had expressive reactions to the appearance of popular Jamaican personalities and could be heard singing along to the catchy hook lines of the music from the Clive Hunt produced soundtrack. “Destiny” struck all the right chords with audience members who had positive comments at the end of the movie.

An interactive question and answer segment at the end of the movie provided some insight on the concept of the film, length of production and casting, for attendees. The evening concluded with cast members mingling with the audience, taking photos and accepting congratulatory compliments in the theater lobby.

“Destiny” is scheduled to open to general audiences in select theatres in New York, South Florida, Chicago, Atlanta, DC and Hartford within the coming weeks. The U.S. Premiere of Destiny was sponsored by The City of Miramar, The Miramar Cultural Center, The Jamaica Tourist Board, Tuff Gong Pictures and Caribbean Airlines.