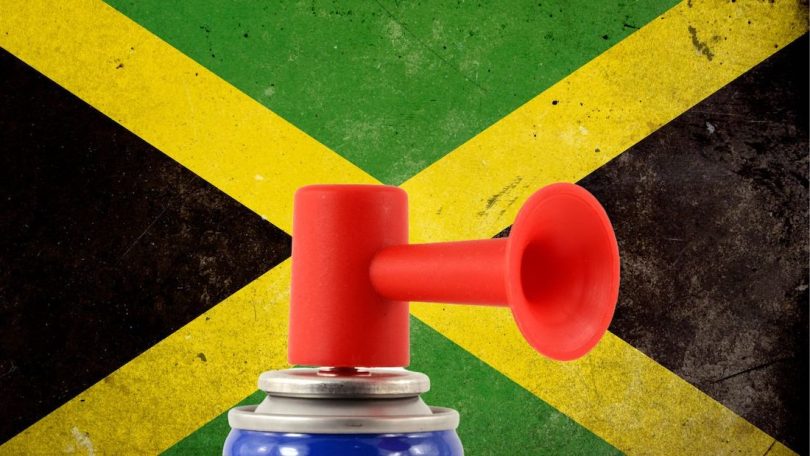 Reggae scholar Roger Steffens says the first air horn to be included in a recording may have been in the B-side dub of the Wailers’ “Raver’s Version” in 1972. The track is an inconspicuous recording released by Tuff Gong until it reaches the three-minute-five-second mark when an air horn sounds just once. There are speculations that perhaps Peter Tosh brought a girl to the studio and let gave her the horn, or maybe it was used by Ziggy or Bob Marley, or a random engineer who had previously seen air horns at dancehalls. However it happened, the air horn became a substitute for the “boom salute” of guns fired in the air, says Steffens, and it became a popular trend in the early 1970s, continuing in Jamaica to this day. Analog air horning went on until the MIDI revolution in the 1980s. During sound system battles, the air horn was used to prompt call-and-response chants. Producers in Kingston took advantage of cheap Casios and programmed them to play synthesizer air horns. The sound migrated naturally into hip-hop sets and in the music of communities settled by West Indian peoples around the world. In the 1990s and early 2000s, when more dancehall made it into reggae and sound system sets, air horns became increasingly popular on the West Coast of the United States. The Beat Junkies and Sun Ra were early adopters, with Sun Ra making the air horn a signature sound in his Afrikan Space Program after hearing mixtapes of Jamaican live bashments. The air horn represents one of the links between reggae and hip-hop, which have been described as “musical cousins.”