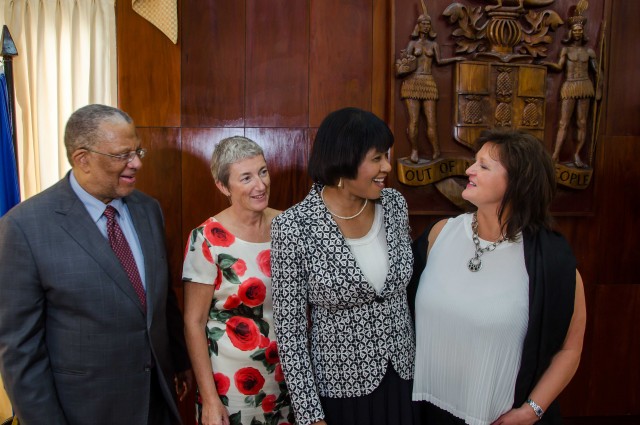 The European Union (EU) has provided J$2.3 billion (€17.7 million) in budgetary support to the Government of Jamaica.

The payments of $1 billion towards the Debt Reduction and Growth Enhancement Programme (DRGEP) and $1.3 billion for the Accompanying Measures for Sugar (AMS) were accepted by Prime Minister, the Most Hon. Portia Simpson Miller during a signing ceremony at Jamaica House today (November 17).

Mrs. Simpson Miller extended gratitude to the EU for its support of the country’s social and economic development.

She said these payments represent a vote of confidence by the EU in the Government’s successful implementation of the Economic Reform Programme.

“The EU and the Government of Jamaica are in agreement on the urgency of further reducing the national debt, increasing the rate and level of economic growth and continuing to improve the standard of living of the Jamaican people,” she said.

The objective of the AMS is to assist the Government in the reduction of poverty and improvement in the living standards of the rural population in sugar-dependent areas affected by the EU sugar reform.

Meanwhile, the DRGEP has the specific objective of achieving marked reversal in existing public debt build-up dynamics, by strengthening public finance and debt management, divesting the State from debt-creating entities and improving the business environment.

The Prime Minister said the support in the areas of debt reduction, growth enhancement and poverty alleviation in sugar dependent areas is in keeping with the commitments of the Government under the national Economic Reform Programme.

“My Administration commits to doing our part to ensure the preservation and expansion of the social and economic gains achieved so far. I believe that with a broad national consensus and international support of trusted partners like the EU, we will achieve our goal of improving the lives of our people and bringing lasting prosperity to Jamaica land we love,” Mrs. Simpson Miller said.

Minister of Finance and Planning, Dr. the Hon. Peter Phillips, also expressed appreciation to the EU, noting that the assistance is critical to maintaining macro-economic stability and for the establishment of a sound platform for economic growth and job creation.

“I want to express deep appreciation…to the European Union which continues to provide development assistance for Jamaica and continues to provide the largest contribution of grant resources, which have proven valuable in the circumstances of our Economic Reform Programme,” Dr. Phillips said.

Over the 40 years of partnership, Jamaica has received over €1.2 billion from the EU, mainly in grant funding.

EU Director for Cooperation with Latin America and the Caribbean, Jolita Butkeviciene, congratulated the Government for working to meet the targets for advancing this commitment.

She noted that the EU will continue to be a partner to Jamaica, particularly through collaboration on climate change at the upcoming 2015 Conference on Climate Change (COP21) in Paris, as well as through its extensive trade portfolio.

There are 15 ongoing projects and programmes within the present National Indicative Programme (NIP), totalling $30.9 billion, which are funded by the 10th European Development Fund (EDF) and the General Budget for the European Union.

During 2015, the Jamaican Government requested budgetary support payments under both the DRGEP and AMS 2011 programmes, of which €17.7 million was disbursed to the Consolidated Fund as two payments in June and August 2015.

The EU Director is on a two-day official visit to Jamaica, during which she made courtesy calls on the Prime Minister and held several high level meetings with the Finance and Planning Minister.