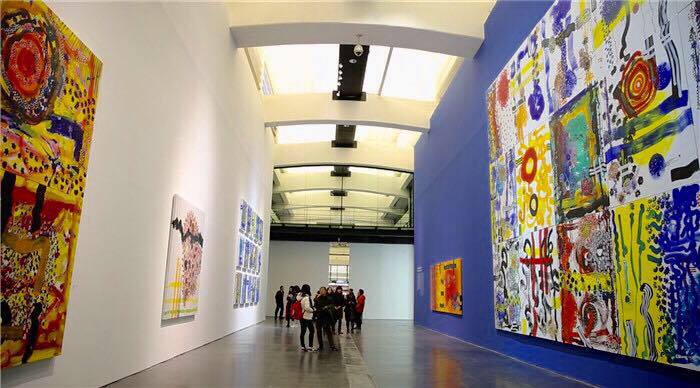 A recent exhibit of 15 works by Jamaican artist Peter Wayne Lewis has gained high praise from art enthusiasts in Beijing, China. Lewis gets his inspiration from his Jamaican family, the vibrant colors of the Caribbean, quantum physics, jazz, and the teachings Buddhism, Hinduism, and Christianity. He gave a tour of his works on display at the Ullens Center for Contemporary Art (UCCA) in the center of the Beijing art district to a group of dignitaries from the Caribbean, including H.E. Chandradath Singh from the Republic of Trinidad and Tobago, H. E. Paul Gomez of the Commonwealth of the Bahamas, H.E. Denis Antoine of Grenada and H. E. Dr. the Hon. Chelston Brathwaite of Barbados. The artworks of Lewis were shown alongside those of the first American artist granted permission in 1988 to exhibit at the National Museum of China, Federick J. Brown. Brown and Lewis were friends for some two decades, and Lewis believed it was his duty to remind the Chinese of the historic nature of Brown’s work. Lewis’s work incorporates elements of various musical genres, which reflects his passion and respect for music, space, silence, and dissonance. He cites Jamaica and the Caribbean region overall as significant influences in his work. Lewis has exhibited worldwide and noted that being allowed to exhibit in Beijing is one of the most important and greatest of his accomplishments. According to Lewis, thousands of Hakka people came from China to Jamaica in 1854 and form part of what makes the island what it is, as well as a part of him. Lewis was born in Jamaica in 1953 and migrated to the U.S. in 1962. Before assuming his current post as professor at the Massachusetts College of Art and Design, Lewis lived in California for 30 years.