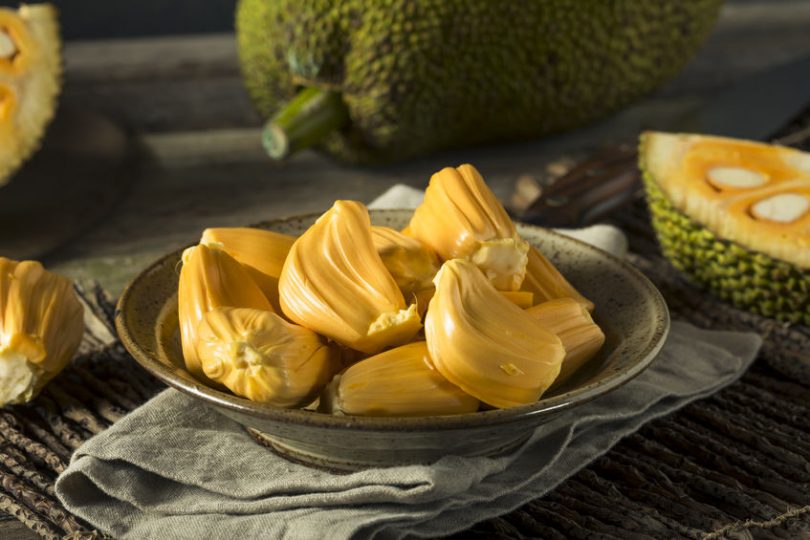 The Jackfruit is said to have originated in India and is part of the breadfruit, fig and mulberry family. It is the largest fruit that grows on a tree. Each Jackfruit can weigh up to a whopping 100 pounds. One thing you should never do, is sit under a Jackfruit tree. Well, not if you don’t want to be knocked unconscious by one of these bad boys falling on your head.

You either love or hate Jackfruit, thanks to the pungent scent it carries. Once you get past the sticky sap (which contains latex), the flesh is mega-sweet and carries a nice flavour, reminiscent of bananas, mangoes, and pineapples. The pulp surrounds an edible seed which can be baked, boiled, or roasted. When the seeds are roasted, some say they have the flavour of chestnuts.

The Jackfruit is another super food, containing Vitamins A&C, calcium, iron, protein and 12% of the potassium required daily by the human body (even the seeds contain these goodies). It is also used in traditional medicine because of the range of fatty acids and amino acids it contains. It also is used in some cultures to make curry. The seeds have the reputation of being great for skin care, when used in conjunction with honey and milk in a facial mask.

Jackfruit is filling and the fibre makes it great for unclogging the intestines. In some countries, the unripe fruit is used as the starchy portion of the meal, in the same way we use rice in the western world. When unripe, Jackfruit supposedly tastes like chicken and pulled pork. Some people are convinced that the Jackfruit inspired the makers of Juicy Fruit chewing gum, since the flavour is similar. However, that could be because both contain the chemical, isoamyl acetate, which carries a fruity smell.

Once looked at as a rejected fruit, this superfood has made a comeback. Jamaican fruit vendors have made Jackfruit part of their regular business since it grows year-round. You can find it being sold on the streets in chunks or pegged and packaged in bags, which means the consumer no longer has the sticky job of removing the fruit from its skin.

Green or ripe, raw of cooked, the Jackfruit is another wonder of nature that’s advantageous to the human diet.