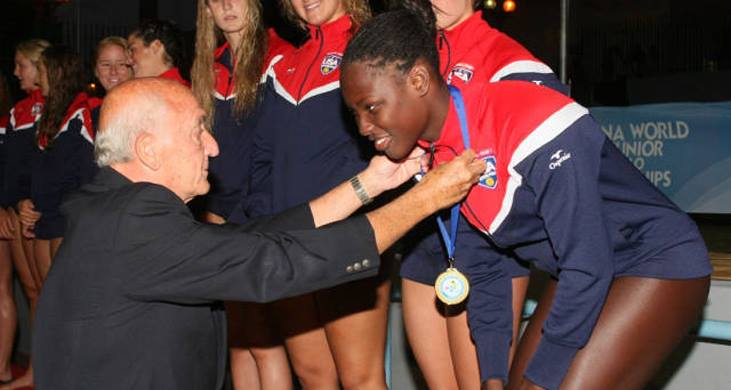 Ashleigh Johnson, 21 years of age and over six feet tall, is set to make history when she becomes the first black woman to play on the United States Olympic water polo team. Ashleigh was born in the U.S., but her mother Donna Johnson was born in Kingston spent her childhood in Duhaney Park with her father, grandmother, and aunt; her mother lived in the States for most of her life. Ashleigh has been described as having “jaw-dropping athleticism” by the Associated Press, which also said that her rise to goalkeeper for the team represents a “welcome” development in a sport that is seeking more diversity and interest beyond “water-polo-crazy” Southern California. Christopher Ramsey, the CEO of USA Water Polo, said that the fact Ashleigh is a high-achiever from Florida who attended Princeton University and has a background different from many traditional water polo players is good for the sport overall. Although Ashleigh and her four siblings were born in the U.S., they have strong ties to Jamaica and visit there frequently; most recently, the family traveled to the island to see their grandfather Rupert Grey and aunt Claudette Morgan. Before emigrating to the U.S. In 1988, Ashleigh’s mother received a BS in International Relations at the University of the West Indies and worked as a field officer for JAMPRO between 1984 and 1987. She migrated to the U.S. In 1988. Johnson says she is “indescribably proud” of her daughter and very happy about everything she has accomplished. Ashleigh was hesitant at first to move away from her family to join a new water polo team in California, not knowing that the Olympics were something she could attain. After working with Coach Adam Krikorian, however, she realized that “the Olympics was a great opportunity and a possibility for me,” she said. In helping the team to qualify at a tournament in the Netherlands in March 2016, Ashleigh had 54 saves, including ten stops in a 11-4 win over Italy in the final that capped an 8-0 performance for the U.S.The team is now in Florida for a three-game match with Hungary, the first competition since the official 2016 Olympic Games roster was announced. The first match is scheduled for Monday, June 27, 2016, at Ransom Everglades School in Miami.