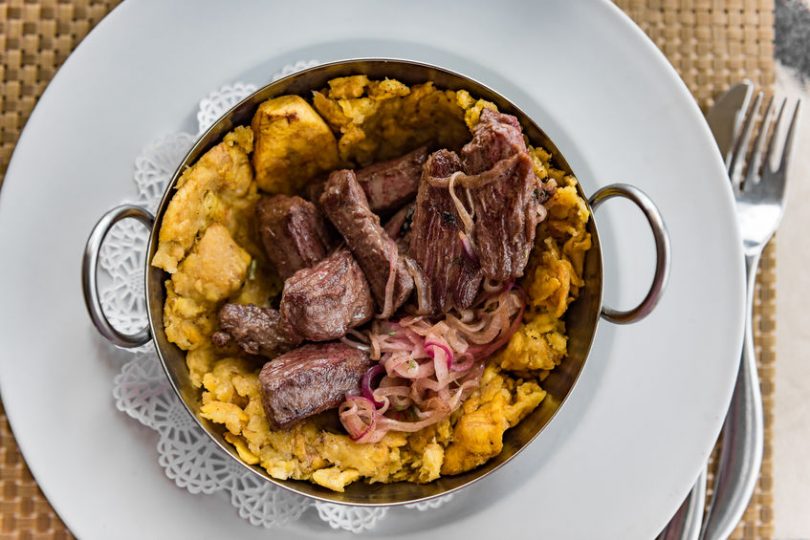 The foods of Puerto Rico are rooted in European cooking traditions, especially those of Spain, as well as the traditions of Africa and of its indigenous Taino people. The nation’s food has been influenced by the United States since the late 19th century in regard to ingredients used. Additionally, influences from Japan and China are also evident in modern Puerto Rican cuisine. Listed below are some of popular dishes served in Puerto Rico. 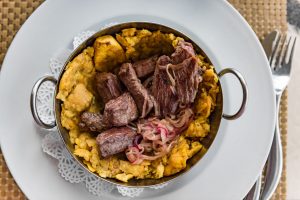 1. Mofongo
Mofongo is a mash consisting of fried green plantains that is typically mixed with pork cracklings. It can be served as a stand-alone dish, as a side dish, or as an entrée. Mofongo relleno is stuffed mofongo with a filling that can be made with shrimp or other seafood, chicken, vegetables, or a combination of these.

2. Asopao
This is the Puerto Rican version of gumbo. An aromatic chicken and rice soup made with onion, garlic, a tomato-based sauce called sofrito, ham, and various seasonings. The sofrito is used as a base for many dishes in Puerto Rico. Asopao recipes are often customized with the addition of olives, capers, or avocado, among other ingredients.

3. Arroz con Gandules
This dish combines rice and “pigeon peas” or gandules. A very simple dish that is also very popular as a side dish. The sofrito is a key ingredient, giving it its seasoning and unique flavor. When ordering Arroz con Gandules, the preferred version involves “pegeo,” a crunchy and browned rice that sticks to the pot.

4. Lechón
This roast suckling pig has a big place in the traditions of Puerto Rico. Family gatherings revolve around this dish, which is revered in the country to such a degree that a road has been named for it. It is the focus of Christmas dinner. Lechón is seasoned and then roasted on a spit to provide a tender meat dish that melts in the mouth. A must-try dish for meat-eating visitors to Puerto Rico.

5. Chillo Frito
This simple dish features fried red snapper. It is best to order a whole fish as this maintains the tenderness of its meat and the crunchiness of its skin, which are critical factors for a successful preparation. It is usually served with tostones, thickly sliced fried green plantains.