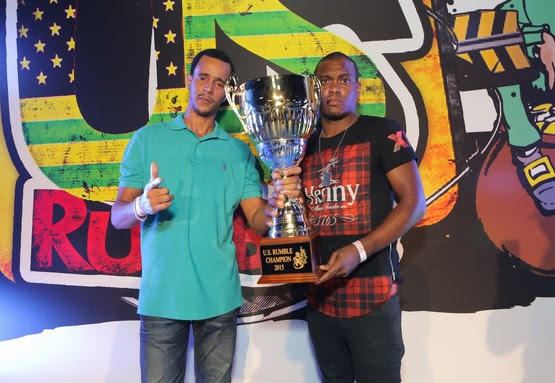 Sound clash excitement peaked on Saturday, October 10, 2015 at what many have deemed the biggest clash of 2015, US Rumble. As the clash kicked off, scores of patrons poured into Amazura to witness the diehard competition of 7 aspiring sounds fighting for a chance in the big leagues. While all sounds arrived on the stage hungry, it was Florida’s Innocent sound, featuring Dappa Lee-thal, that reigned supreme and won the US Rumble 2015 sound clash, earning the coveted title of America’s National Champion Sound and slots representing the US on the famed UK Cup Clash and World Clash competitions. Dappa Lee-thal catapulted into victory at the Irish and Chin produced clash after defeating King Shine (featuring Jimmy Spliff) 4-0 in a heated “tune-fi-tune” face off.

“I’ve been working hard since 1997 to make Innocent sound a forced to be reckoned with and honestly, this victory means everything to Innocent sound,” says the soft spoken Dappa Lee-thal humbly. “It’s time to step up and put in even harder work then we did to reach this far.”

Enthusiastic over US Rumble and Innocent’s win, promoter Garfield “Chin” Bourne says, “Innocent displayed a combination of qualities that ultimately led them to the victory, including strong speech, strong dub plates, complimented by some ‘lethal’ 45 selections.”

“Congratulations are definitely in order for Innocent sound who deservedly won the clash,” Chin adds. “I will say that all the sounds in this year’s competition should truly deem themselves as champions for each traveled a long, windy road to reach the US Rumble stage. Moreover, the competing sounds showed that even though they are young, they boast the ability to capture the interest of today’s clash fans.”

With the 4 AM hour quickly approaching, the large and diverse audience anxiously observed the “tune-fi-tune” segment between the clash’s remaining sounds and crowd favorites Innocent and King Shine. For time reasons, the preceding round was cut short, seeing the elimination of Nexxt Level, who delivered a commendable, solid performance through out the clash. Prior to Nexxt Level’s exit, Black Hustler, Love People, Broken Silence and King Fargo were eliminated from the clash. All of the competing sounds displayed good showmanship and skills, but intermittently failed to either connect with the crowd or partner good speech and tunes.

It was clear from the start of the “tune-fi-tune” that 45 selections were Innocent’s major strength. Ultimately, a bevy of back-to-back heavy hitting tunes and crowd pleasers were unleashed by Dappa Lee-thal, allowing him to dominate this segment. Notably, despite challenges during the “tune-fi-tune,” King Shine undoubtedly scored some of the largest forwards of the night.”

“Tune-fi-tune is my specialty,” says Dappa Lee-thal. “So, Innocent basically countered King Shine with speech and followed with a song to compliment the situation……had to be spontaneous.”

“When you join a clash like this with so many sounds, you have 0 idea if you will end up in the finals. You just plan on putting your best foot forward and hope its enough to get you there,” says King Shine’s Jimmy Spliff. “I was blessed to make it so far.”

Early in the clash, Innocent’s Dappa Lee-thal connected with the massive New York crowd, which everyone knows can be tough. He opened up to the crowd about his recent obstacles, which included his boss getting “dipped,” Nasheen leaving the sound and his selector’s (Juxxy Fyah) flight being delayed, forcing him to perform alone. He said passionately, “Me and God inna dis tonight,” and then dropped the crowd pleaser and classic, “One Man Against the World” from the legendary Gregory Isaacs. He sailed through the first round and subsequent rounds seamlessly with genuine speeches that were perfectly accentuated with just the right tunes. Innocent dropped heavy Junior Gong tunes from early and without a hitch, executed the roles of mic man and selector alone.

“What doesn’t break you can only make you stronger,” says Dappa Lee-thal. “It wasn’t until I boarded my flight and started going through my laptop that I started to feel this clash. Despite the obstacles before me, I came into the venue feeling I had a good chance.”

King Shine was truly a “shining” star through out the US Rumble clash. Also a solo act, King Shine’s Jimmy Spliff won over the hearts and ears of clash fans from round one. While some were aware of his immense music catalogue, it was his over-the-top stage presence, wit and bonding with the crowd that made the audience roar of cheers, whistles, horns, yells and other signs of favor through out the competition. With a personal story to tell, King Shine openly discussed his battle with cancer, the joy of life and making it to the US Rumble stage. The New Jersey based selector declared that if he could beat cancer he could beat any sound, “cause no sound badda den cancer.” As he made his speech with conviction and dropped an acoustic version of “They Don’t Know” by Chronixx, even the toughest of audience members had to hold back the tears. Without question, King Shine earned a whole new level of respect from peers and fans.

“Overall, my ‘US Rumble’  experience was awesome……starting even way back before the clash.  Chin gave us an open door to do his show and gave the sounds opportunities to push our brand,” says King Shine’s Jimmy Spliff.  “I believe that me buss’n nearly every round kept me in the clash and I can honestly say that King Shine is the only sound that didn’t have a boring moment or period of getting booed when ‘chune’ was playing.”

The turnout for US RUMBLE was impressive and significant for numerous reasons. Namely, it showed that the sound clash arena can be reignited, patrons are willing to take a chance to support the unknown, clash fans can be receptive to change and fans have not given up on the sport. It’s up to the sound clash fraternity to continue exciting audiences and fans and giving them something to buzz over.

US Rumble marks a new day for  sound clash culture.  Frankly, it’s the first time that so many members of the sound clash fraternity united and voluntarily came together to endorse an unbranded event. This is only the beginning. In an effort to further seek and discover new talent, Irish and Chin plans to turn the Rumble brand into a series of events that will be held in different regions.  Some of the regions the promotions company are eyeing include Canada, Europe and the Caribbean.