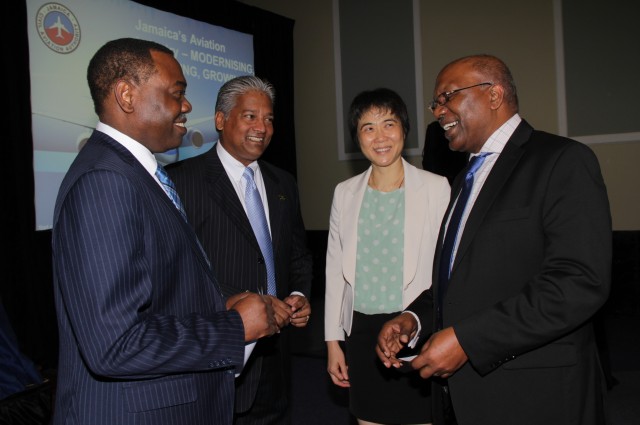 Continued strides being made by the Government in modernising the aviation sector will serve to boost tourism and promote economic development.

This is the view of top experts in the industry, who met earlier this week at the Iberostar Hotel in Lilliput, St. James, for the International Civil Aviation Organization’s (ICAO) council meeting.

During the two-day meeting, from October 12 to 13, Jamaica was repeatedly praised for its commitment to the development of the air transport sector, and was described as a leading player in the region.

President of the ICAO, Dr. Olumuyiwa Benard Aliu, in his address, said a lot can be learnt from Jamaica’s approach to aviation, noting that the country is showing the kind of vision that will inevitably lead to huge economic rewards.

He noted that by enhancing the safety and efficiency of its air transport system, Jamaica is well positioned to exploit its proximity to countries such as the United States (US), Canada and Mexico for tourism and trade.

He noted that nearly 75 per cent of all flights go through countries in the Western Hemisphere, Jamaica included, and the country is in a position to take advantage of this high volume of air traffic.

Chief Executive Officer of MBJ, the operator of the Sangster International Airport, Dr. Rafael Echevarne, said the kind of traffic that has been passing through the airport is proof that the country’s investment in aviation is reaping dividends.

“Worldwide, less than 20 per cent of the world’s airports are certified and we are in a very incredible situation, whereby Montego Bay airport is fully certified. This is something that is truly amazing and which we should be proud of,” he said.

The Montego Bay-located airport has been named the best airport in the Caribbean four years in a row by the World Travel Awards, and is among the 20 per cent of airports worldwide that are ICAO-certified.

He said he expects even more stopover arrivals for the 2015/16 winter season, which starts in December.