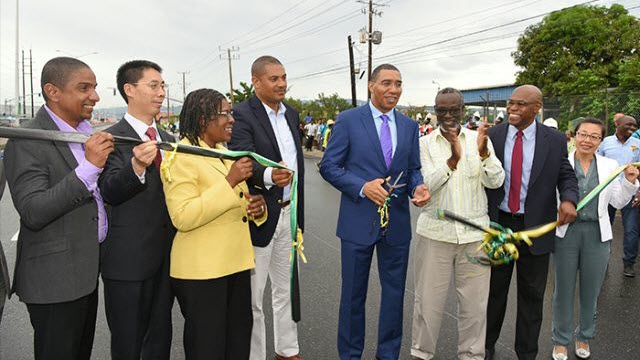 Prime Minister, the Most Hon. Andrew Holness, says the Government is taking a strategic approach to improving Jamaica’s road network.

He pointed out that due to budget constraints, the Government cannot undertake repair or upgrading of every road that needs such work at the same time.

As such, he said, priority is being placed on roads that are in close proximity to the centres of industry and commerce and can create the level of connectivity to facilitate seamless commuting.

“So persons have to appreciate and understand that the Government has to be strategic to address your needs. If we don’t fix your road this year, it doesn’t mean that it will never be fixed… but that we are putting a plan in place to ensure that we can fix your road… and we are serious about that,” he said.

The Prime Minister was speaking at last week’s opening of the newly upgraded Marcus Garvey Drive in Kingston.

The US$20.5-million project, which was undertaken by China Harbour Engineering Company Limited (CHEC), entailed significant upgrading of 2.44 kilometres of the roadway between East Avenue and Harbour Street.

Key features include widening of the roadway from four to six lanes; construction of sidewalks and a median to separate the eastbound from westbound traffic; installation of traffic signals, street lights and the requisite signs and markings; and major drainage improvements.

The project was executed under the Major Infrastructure Development Programme (MIDP) with funding support from the Government of the People’s Republic of China.

The Prime Minister noted that Marcus Garvey Drive, which runs through one of Jamaica’s major industrial zones, is a pivotal link to existing and potential factory, logistics and port facilities and developments.

“So, when we decided to fix this road that is carrying 40,000 motorists every day, which is near to the ports (and) near to where we can develop logistics, this illustrates how that connectivity will drive (economic growth),” the Prime Minister explained.

Mr. Holness informed that several other roads are either being upgraded or earmarked for improvements under the MIDP.

These, he said, include the US$64-million Mandela Highway project now under way, which entails widening of the road from four to six lanes, for which a US$68-million extension has been signed incorporating a section of Spanish Town Road.

“When we are finished, you should be able to move (seamlessly) from Three Miles to the Old Harbour Road roundabout,” the Prime Minister said.

He further highlighted the US$4.4-million Barbican Road improvement project, which commenced in August and is slated for completion in December. This project entails significant upgrading of 1.1 kilometres of the 3.75-kilometre roadway, which is expected to alleviate traffic congestion in that area.

Earmarked projects include the widening of Hagley Park Road in Kingston, for which lands have been acquired; Constant Spring Road in St. Andrew for which plans have been developed and land acquisition is in progress; and the Southern Coastal Highway Improvement Project, the commencement of which is expected to be announced shortly.

The Prime Minister also mentioned the Ferris to Mackfield Road in Westmoreland, for which the designs have been completed and negotiations for its implementation are in progress.

He advised that the designs, road alignments and traffic study have been done for the Montego Bay bypass road. “We have to now finalise the costing and find a programme under which to accommodate (it),” he said.