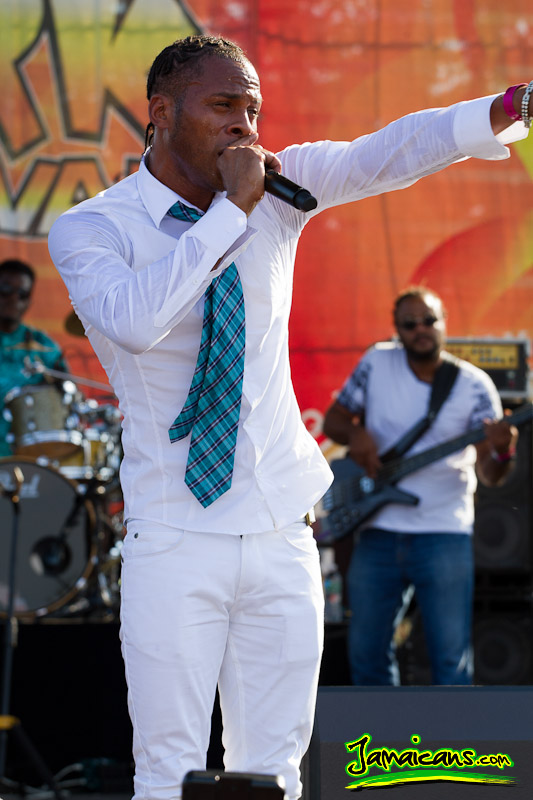 The intense smell of great food capped with the leading brand of jerk seasonings, created a peripheral dome for

Thousands of eager patrons ready to sample their way into an entertaining afternoon at the recent staging of Grace Jamaican Jerk Festival on Sunday July 17.  The annual family oriented affair known for creating a unique family experience, kept their patrons ‘full, and fully’ entertained.  The attractions included beauty and brains reigning Miss Jamaica World Dr. Sanneta Myrie who showcased her cooking skills.  Cultural stage, celebrity appearances, comedy, and music legends, made the afternoon the worth it.

As the clock ticked, the entertainment package began with Kadian ‘Ikaya’ Bailey’s first note that struck us into a musical frenzy.  Her intense vocals lured the crown into Hard Way, High With You, Ain’t Giving Up and Ugly Girl, all of which were synonymous to her hot and spicy performance.  But that was not all that Ikaya had to chime.  For You, Redemption Song, Fly Away, and When Jah Jah Say No, her spin-off to When The Devil Say No, a fitting tribute to the late music icon, Dennis Brown.

As the afternoon progressed the agile Bajan-born Rupee hyped the atmosphere with a medley of soca, hip hop and lustily choreographed dance moves to – Tempted To Touch, Blame It On The Music, and Jump.  An engaging performance showcased his quirkiness in Scooby Do, Thunder Clap, Signal The Plain and finally ended with a ‘Selfie ‘of the crowd and himself.  I was absolutely impressed with Rupee who displayed a high level of professionalism after having performed two consecutive evening’s out of state but kept his audience engaged though it was apparent that exhaustion was imminent. Bravo Rupee!

Young, vibrant, and alluringly intoxicating best describes Dexta Daps. Like a Panther circling his prey he sprung on his fans with 7eleven! The scene was a like a vivid clip from the 1964 Beatles concert with screaming girls and dreamy women. Daps’ performance had the crowd in a musical tail spin with Cheat On You, Pretty Nicky, From Mi Heart, Morning Love, Gal A Mad, Jealous Ova and Lights On. His slender frame drenched in sweat spiked his intensity as he bedazzled his fans with Beres Hammond’s Step Aside, She’s Still Loving Me and Only The Lonely finally ending his set with Chinese Jordan.  But his fans could not get enough of him and unanimously Daps reentry – bare-chested and chiseled, he sealed his encore with Morning Love.

Daps’ performance was a hard act to follow and Gyptian’s obvious detachment with the band changed the atmosphere.  His musical hits paled to energize the crowd and in ‘that instant Mamma Don’t Cry was perfectly timed.

Stringed instruments combined with the rhythms akin to that of the mother land Africa, that was how renowned 96 Degrees In The Shade reggae band Third World proved once again the group’s iconic status is solid.  Hits after hits Third World’s 42-year musical repertoire was refreshingly entertaining.  The band escalated their set with How Could It Be, Sense of Purpose, Committed, Redemption Song, and Try Jah Love, along with a poignant tribute to the State of New York.  Newby AJ ‘Boots’ Brown, the epic replacement for William “Bunny Rugs” Clarke on lead vocals, synced perfectly with Stephen “Cat” Coore on lead guitar.  Their rendition in honor of Muhammad Ali, Prince, Nelson Mandella, and Robert Nesta Marley ended on a high note.