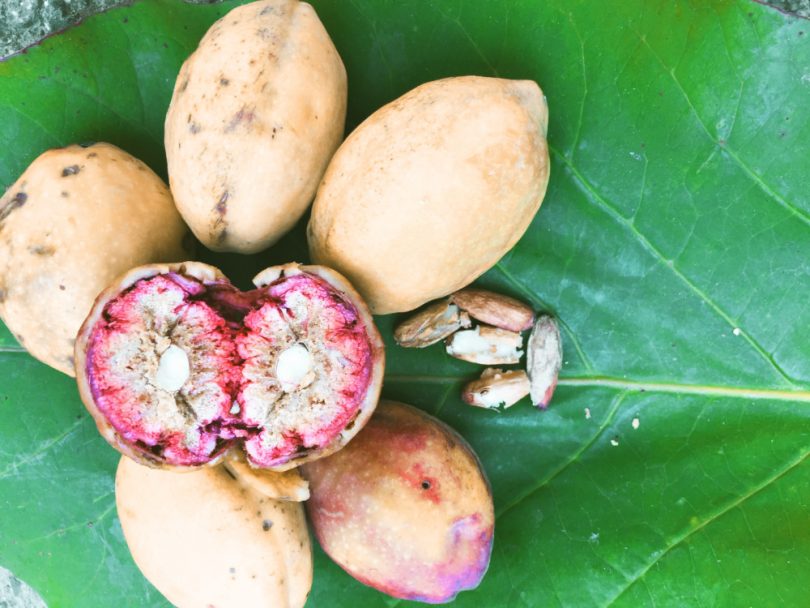 Like a fair portion of fruits that grow on the island, the Jamaican almond is special. It is a rare variety that grows in abundance, along the sea shore and provides shade. Many of us do not realize that almond is a fruit and not a nut. It is believed that almonds originated in China and was transported to the Middle East and Europe.

How it came to the Caribbean, is shrouded in mystery. My guess would be that since the Spaniards are credited with introducing almonds to California in the 1700s, they too might have been responsible for bringing them to Jamaica, which was a Spanish territory up to 1655 when the British overran the island and chased the Spanish out.

The strangest thing is, as great as almonds are for the body, Jamaican’s aren’t crazy about them. You’ll find the fruit strewn on the ground in large quantities and yet we import the stuff and retail it at crazy-expensive prices. Part of what makes the Jamaican almond unique is that the oil produced from it has amazing properties.

Almond can be had raw or toasted and a personal favourite of mine is baking them in fruit and Dundee cakes. Speaking of which, almond flour is gluten free which makes it desirable for those of us with allergies or who prefer a healthier bread. The almond is a wonder of nature as all its derivatives (butter, oil, milk) are useful for cooking.

PROPERTIES: They are a wonderful source of carbohydrates, fibre, minerals – including calcium, iron, phosphorus, magnesium, potassium and vitamin E. Almonds contain monounsaturated fat, which reduces bad cholesterol in the body and B17 (an anti-cancer vitamin).

N.B. In 2007, the Food and Drug Administration (FDA) in America banned the sale of raw almonds, so it became illegal to sell raw almonds, except under special circumstances. Almonds that are grown/sold in the US must be pasteurized, but it seems one of the agents used in pasteurization (propylene oxide) is harmful for the human reproductive system and may be cancer causing.

BENEFITS: Almond protects against diabetes, heart disease, impotence and is good for our bones and teeth. The oil derived from almond contains healing properties and is great for hair and skin (think help with eczema and psoriasis). It reduces blood pressure and blood sugar levels, is good for brain health, weight loss, reduces inflammation, and boosts the immune system. These are not nearly all the benefits of this wonder of nature.

DISCLAIMER: This information is strictly for entertainment, not medication!