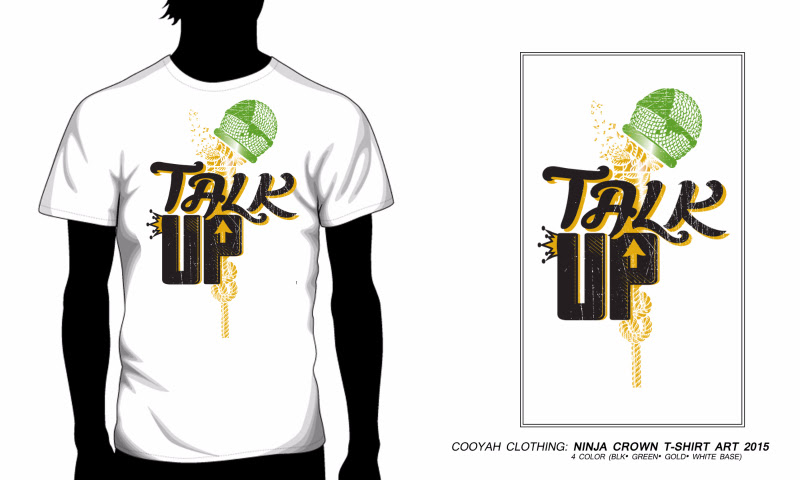 One’s voice can be used to entertain, educate and create awareness, for Ninja Crown, Talk Up bridges all those facets. As a key member of the world famous Mighty Crown sound system, and the host of several top rated radio programs, Ninja’s voice can be heard loud and clear throughout the world. What proudly sets Ninja apart from some of his counterparts, is his outspokenness and candor.

Those traits echo and fit in with Cooyah’s clothing line mission. Cooyah Clothing Inc. is inspired by the faces, races, shapes and sizes of all humanity. Born out of Jamaican, Jewish Reggae, Rasta, and Caribbean culture, they feature a unique line of custom shirts, couture and accessories, many designs which are Hand Drawn. “The Evolution of Life” Bringing out the spiritual side of all of us, self-expression, and a sense of bliss, harmony, goodwill & peace.

As music and fashion comes from the same place of creativity and walk hand in hand, Ninja Crown announces his signature t shirt line “Talk Up” by Cooyah.

The shirts slogan is clear, precise and simple, “Talk Up”. It is focused on inspiring people to Talk Up. Let it be a conversation starter, Talk Up about injustice, Talk Up about the need for the the less fortunate, Talk Up for the Voiceless.

“As a selector and MC I use the microphone to make people feel good, entertain and ease their minds of their day to day stress. But it is very important to me that we collectively use our voice to “Talk Up” for the injustice and things we see happening and don’t agree with in order to live  a better quality of life. Music takes me around the world and in front of millions of people and I’ve realized the power of the microphone, the power of our voices and the power in social awareness. Let’s minimize the frivolous concerns and talk up for the less fortunate or injustice in order to create some form of change” says NinjaCrown.

“A perfect example of what my TShirt line is all about is Inner Circle and Kabaka Pyramid – “We the People Haffi Talk.”.

“But talking is not enough the MC added, I would like to partner with Kingston Public Hospital to access needs and donate a portion of T shirt sales to them. Something as small as medical gloves, bandages, anti bacterial soap dispensers are needed. These are just some of the day to day necessities doctors nurses are working without”. stated Rohan “Ninja Crown” Henry

From July 29th to August 5th, Ninja will be in Jamaica to help spread the word. The venture between Ninja Crown and Cooyah is definitely one, which will make some noise and unite many worldwide!
Ninja Crown has been riding high for over a decade as a key member of world famous Mighty Crown sound system.

The dapper New York-based sound man is heralded as one of the industry’s most consistent selectors, mastering a knack for both juggling and clashing. Ninja Crown, aka Rohan Henry, is the only U.S. residing member of the Mighty Crown sound system, who hail from Yokohama, Japan.

Over the years, the popular selector has played a critical role on Mighty Crown’s tours and high level juggling and clash performances. Members of the International sound refer to him as the glue that bonds the 4-member team. Because of his love of music, high level of expertise and flexibility, Ninja Crown is present on 90% of Mighty Crown’s tour dates and was instrumental on “The Far East Rulaz” 60 city, 3 continent “Driving Force Tour” that spanned from 2013-2014.

In late 2014, Ninja Crown rocked the historic “Welcome to Jamrock” Reggae Cruise, dropping just the right tunes and dub plates for MCs Simon and Sami T to “level” the massive main deck audience. Much to his credit, Ninja Crown’s regard on the sound has secured him many notable solo performances.

When recently asked about his greatest strengths as a selector, Ninja Crown replied earnestly, “Bringing the juggling experience to a war sound and my ability of mixing all genres of music without losing crowd attention and momentum have to be by strongest attributes.”

Adding to a growing list of accomplishments, Ninja Crown has successfully donned the hat of radio personality for over 3 years. The energetic selector doubles in the role of co-host and DJ on the top rated Sound Chat Radio talk show, which is syndicated in 20 markets (streaming from Irishandchin.com). Along with co-host Chin, Ninja dishes the dirt on hot topics centered on Reggae Dancehall and Sound System culture and news impacting the greater Caribbean diaspora. Ninja frequently interviews the who’s who of Caribbean entertainment on Sound Chat Radio. Through it all, the skilled DJ provides the ultimate music for the program.