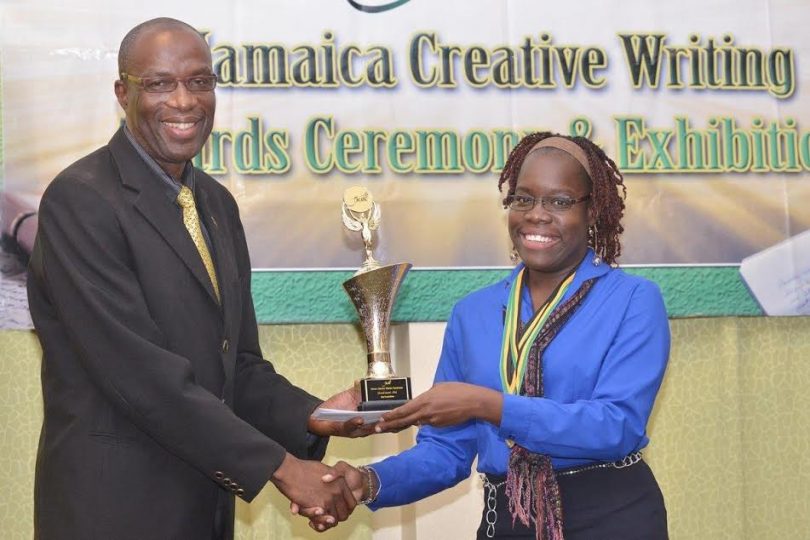 The award-winning pieces of the 2016 Jamaica Creative Writing Competition are being showcased in the competition’s annual island-wide tour from August 9, 2016 to April 12, 2017.  The winning pieces will be hosted in libraries across all 14 parishes to give members of the public the opportunity to appreciate and recognize the award-winning works.

The tour began in Kingston at the National Library of Jamaica on Monday, August 9 and will conclude on August 23. The Exhibition will then move to the parish libraries, starting with St. Andrew, which will have its opportunity to showcase the outstanding pieces from August 25 to September 16. From September 20 to October 4, the Exhibition will be in St. Thomas and in Portland from October 6 to October 21 and in St. Mary from October 24 to November 8. For St. Ann, the tour will get underway November 10 to November 24; Trelawny, November 28 to December 12; St. James, December 14 to January 2, and Hanover, January 4 to January 18.

Persons in Westmoreland will be able to observe the Exhibition from January 20 to February 3; St. Elizabeth, February 6 to February 21; Manchester, February 23 to March 9; Clarendon, March 13 to March 27 and St. Catherine, March 29 to April 12.

The annual awards ceremony held recently awarded top writers with cash prizes, certificates of merit, medals and trophies. Ruth Howard was named the Best Overall Writer, while 2nd place was given to Collette Robinson who was also named Outstanding Writer for the second year in a row. The third place and Special Writer Award was copped by Joseph Edwards and 4th place and Choice Writer Award given to Rohan Facey. Noteworthy writer, Yashika Graham was given 5th place.