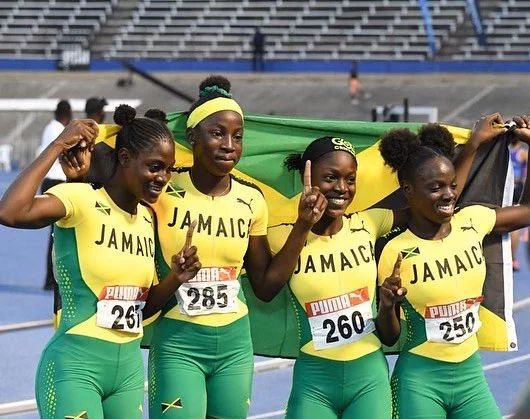 Junior athletes representing Jamaica dominated the 49th staging of the CARIFTA Games, ending the three-day event at Kingston’s National Stadium with a total of 92 medals. The record total outpaced Jamaica’s 89 medals earned at the 2014 CARIFTA Games in Martinique. On April 18, the final day of the tournament, Jamaicans broke records in the 4×400-meter relays and won all four races.

Dionjah Shaw achieved a distance of 45.32 meters in the Under-17 girls’ discus on her second attempt for the win. She also threw 45.07 on her fifth attempt, with both of her throws outdoing the previous record of 43.99 meters. Kobe Lawrence established a new record in the boys’ Under-20 shot put with his 20.02-meter effort, beating the previous record of 19.97 meters set by Jamaican Warren Barrett Jr. in 2016. Christopher Young of Jamaica took second place with 19.12 meters.

In the boys’ Under-20 triple jump, Jaydon Hibbert achieved a distance of 16.46 meters and set a new record by overtaking the previous 16.35 meters. On his second attempt, he reached 17.05 meters, but it was not considered a record due to the trailing wind of 2.8 meters per second. Royan Walters, a teammate of Hibbert’s, took third place with a jump of 15.99 meters.

Jamaica also won three of the four 200-meter races, with Rickoy Hunter, who finished in 22.13 seconds, and Marchino Rose taking first and third places, respectively, in the Under-17 boys’ event. Brianna Lyston won gold in the Under-20 200-meter race with a time of 23.16 seconds, and Kaylia Kelly won bronze. Bryan Levell, who ran the distance in 21.18 seconds and Sandrey Davison, who ran it in 21.35 seconds, took first and second place in the boys’ Under-20 event.