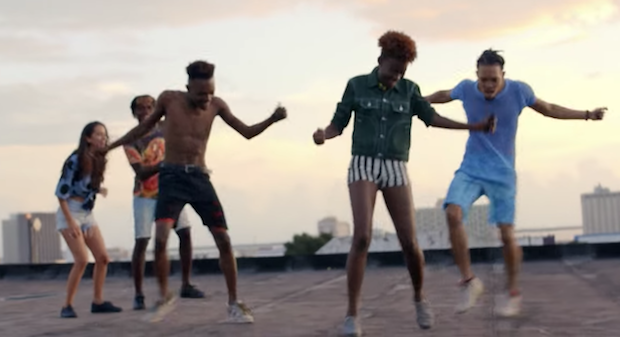 Jamaican-born director Storm Saulter worked with the band Arcade Fire on its new video “Peter Pan (Equiknoxx Remix).” The video has been described as a “Lo-Fi Teenage Dancehall Fairytale” and features dancehall stars Malek Lamont and Rayana Campbell in the roles of Peter Pan and Wendy. The story is told against the backdrop of the skyline and dance moves of Kingston. The video reflects Arcade Fire’s “love for and familiarity with the music, culture, and people of Jamaica.” Two remixes of “Peter Pan” are included in the video. One of them by the due Equiknoxx, which is based in Kingston, and the other is from composer Jeremy Ashbourne. Amanyea Stines is the choreographer on the video. Stines previously worked with Cardi B and Major Lazer.

The relationship between Saulter and the Canadian band stems from 2013 when he photographed Arcade Fire during their album sessions for “Reflecktor.” On September 19, 2018, Richard Reed Parry of the band released a new track called “I Was in the World(Was the World in Me),” which is taken from his pending solo album “Quiet River of Dust Vol.1.” This album was released on September 21, 2018.

Arcade Fire is a Canadian rock band comprised of Win Butler and Regine Chassagne, who are husband and wife, and with Win’s younger brother William Butler. Richard Reed Parry, Tim Kingsbury, and Jeremy Gara are also members of the band. Its current tour includes Sarah Neufeld, a former core member, along with percussionist Tiwill Duprate and saxophonist Stuart Bogie.

It was founded in 2000 by Win Butler and Josh Deu, who had been classmates. It became well known in 2004 when it released its critically praised debut album “Funeral.” The second album “Neon Bible” won the 2008 Meteor Music Award for Best International Album and the 2008 Juno Award for Alternative Album of the Year. “The Suburbs,” their third album, received critical acclaim in 2010 and was also a commercial success. In 2011, this album won the Grammy for Album of the Year, the Juno Award for Album of the Year, and the 2011 Brit Award for Best International Album. The fourth album was released in 2013 and was called “Reflecktor.” Arcade Fire wrote the score for the feature film “Her,” which won an Academy Award nomination for the Best Original Score. A fifth studio album “Everything Now” was released in 2017.