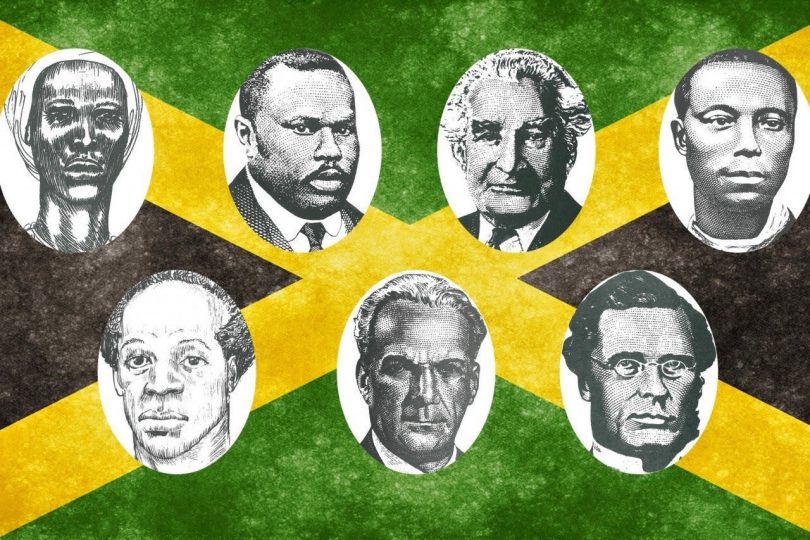 PAUL BOGLE
birth date uncertain-died 1865.
Paul Bogle, a Baptist Deacon was generally regarded as a peaceful man who shunned violence. He believed in the teachings of the Bible, endorsing the principles of charity and endurance. Yet he was also a leader and organizer who knew well the terrains of the land and had spent time in educating and training his followers. He lived in St. Thomas and led the Morant Bay Rebellion in 1865. GEORGE WILLIAM GORDON
1820-1865.
George William Gordon was a free colored landowner and an associate of Bogle. As a member of the House of Parliament, he used his position to highlight the sufferings of the people and to make a plea for changes. The Morant Bay Rebellion and the resultant deaths of Bogle and Gordon precipitated the beginning of a new era in Jamaica’s development. The British government became compelled to make changes including outstanding reforms in education, health, local government, banking, and infrastructure. NANNY
lived and died in Nanny Town.
Nanny of the Maroons stands out in history as the only female among Jamaica’s national heroes. She possessed that fierce fighting spirit generally associated with the courage of men. In fact, Nanny is described as a fearless Asante warrior who used militarist techniques to foul and beguile the English. Like the heroes of the pre Independence era, Nanny too met her untimely death at the instigation of the English sometime around 1750’s. Yet, the spirit of Nanny of the Maroons remains today as a symbol of that indomitable desire that will never yield to captivity. SAMUEL SHARPE
1801-1832
‘Daddy’ Sam Sharpe, as he was affectionately called was to carry on the resistance against slavery affecting at the young age of 31, the most outstanding Slave Rebellion in Jamaica’s history. Sharpe, an educated town slave, was a preacher and spokesman. Intelligent and sharp, he followed the developments of the abolition movement by reading discarded local and foreign papers and was able to advise his followers. Sharpe was tired of slavery, spent months in strategic planning, educating the slaves and traveling from estate to estate in secret meetings at nights, igniting the slaves with inspiring messages of hope of freedom. The 1831 Christmas Rebellion started in St. James and spread throughout the entire island. The Rebellion started on December 28 and lasted 8 days. Sam Sharpe was eventually captured and hung at the Parade in Montego Bay (now renamed Sam Sharpe Square). On August 28, 1833 slavery was abolished and the System of Apprenticeship instituted, allowing for the total freedom of slaves in the next 4-6 years. On August 1, 1938 the Apprenticeship System ended granting full freedom to the slaves. SIR ALEXANDER BUSTAMANTE
1884-1977
Alexander Bustamante was an aggressive, outspoken young man who understood the dynamics of labor relations. A charismatic and impressive speaker, he used the media to criticize the prevailing political system and its attendant social problems. He started the Industrial Trade Union in 1938 and was jailed for 17 months following labor riots. He became Jamaica’s first Chief Minister, a position he held until 1954, being knighted that same year by the queen. On August 6, 1962, Jamaica was granted full independence. At the first session of Parliament, Bustamante received the Instruments of Independence from the queen’s representative, Princess Margaret. This time in Jamaica’s history drastic changes were heralded, not by bloodshed but by peaceful negotiations. NORMAN WASHINGTON MANLEY
1893-1969.
Norman Washington Manley founded the People’s National Party which later was tied to the Trade Union Congress and the N.W. U. Together with Bustamante, their efforts resulted in the New Constitution of 1944 granting full Adult Suffrage. In 1955 Manley was elected Chief Minister. The 400 year British Rule, invoking slavery, deculturization, uprising, and bloodshed was now at an end. MARCUS MOSIAH GARVEY
1887-1940.
Marcus Mosiah Garvey stands out in history as one who was greatly committed to the concept of the Emancipation of minds. Garvey who was born in St. Ann became famous worldwide as a leader who was courageous and eloquent in his call for improvement for Blacks. He sought the unification of all Blacks through the establishment of the United Negro Improvement Association and spoke out against economic exploitation and cultural denigration. He spent many years in the United States pursuing his goal of Black Unification.