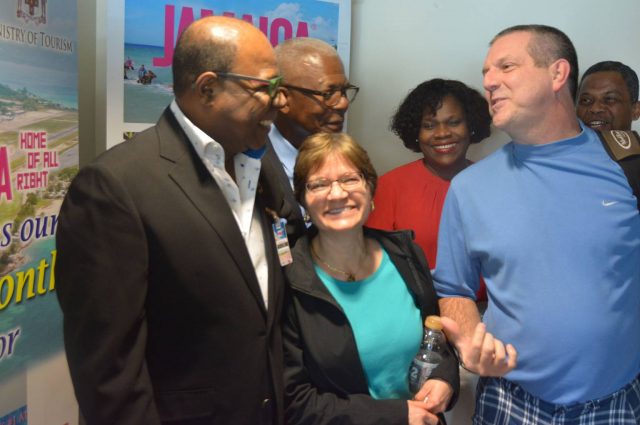 The tourism industry of Jamaica marked a significant and historic milestone on December 15, when the island welcomed its four-millionth visitor in 2017. Jamaica’s Minister of Tourism, Edmund Bartlett and a delegation of officials from the tourist sector greeted Jill Bell at Sangster International Airport in Montego Bay. Bell and her husband Stephen made the trip from their home in Wisconsin. It was their 25th visit to the island.

With 4,000,000 visitors. 2017 has had the single largest yearly number of tourists visiting in its history. In conjunction with the historic numbers, Jamaica’s tourism sector is also close to reaching total earnings of US$3 billion for the year. “Four million visitors in a single year is no ordinary feat,” said Bartlett. The visitor numbers break down as follows for 2017: 1.9 million cruise ship arrivals and 2.1 million stopover arrivals. By the end of December 2017, Bartlett expects to see the numbers increase to 2.3 million stopover arrivals and approximately 2.1 million cruise ship arrivals. Earnings were up 11.7 percent over the same period in 2016, plus the sector has seen a retention rate of 30 percent, which represents about US$1 billion in circulation throughout the nation’s economy, which creates a significant trickle-down effect, said Bartlett. He also noted that winter arrivals in 2017 are five-percent higher than in 2016, the largest winter cycle ever experienced.

Bell expressed her surprise and appreciation for the prizes she received from the Tourism Ministry, American Airlines, and Sandals Resorts International for being the four-millionth visitor. She said that Jamaica is like a second home to her and her husband. “We keep coming back all these years because of the love that has been shown to us and because of the many friendships we have built over the years,” Bell noted, adding, “There is really no other place like Jamaica . . . no other place on earth where we can enjoy a drink of sorrel and hang out with some wonderful people. We are indeed very humbled by the reception we have received today,”