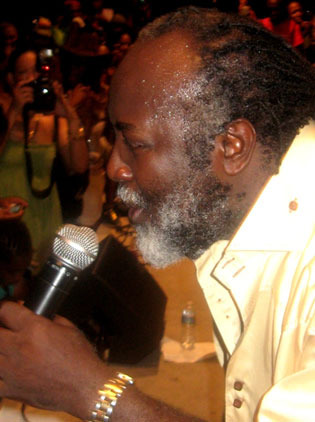 Arundel County Maryland: The DC tri-state area (Washington/ (Virginia/Maryland) Jamaican community kicked of its celebration Jamaica’s 48th year of independence, in spectacular fashion, with the fourth staging  of the annually Jamaica Day Outdoor Reggae Festival celebration at Anne Arundel County Fairgrounds in Maryland. The concert presented by Jamaica Promotions Company is the brainchild of Carlos Daley and his wife Joy. The event was inaugurated in 2007 to give tri- DC area a taste of Jamaica’s musical culture. And, having survived the festival’s inaugural hiccups in 2007; its growing pains in 2008, the transition in 2009, the 2010-staging of the Jamaica Day saw the music fest event come of age. The tri- DC area Maryland/DC audience was entertained by some outstanding performances by the all-star artists’ line up, and the crowd showed their appreciation and enthusiasm.

The 4th staging of Jamaica Day Outdoor Reggae Festival had the stars including; Tanya Stephens, Half Pint, Tinga Stewart, international dancehall sensation Serani and reggae legend Freddie McGregor.  Weather-wise; Mother Nature decided to give us respite from the sweltering 100 degrees heat wave that caused electrical blackouts due to air-conditioner over loads. She provided the slightly balmy breeze descending from the sloping hilly grass amphitheater like area where the audience gathered before the stage, to offset warm temperatures. Many who travelled from neighboring Virginia, Washington DC, and Baltimore shaded from the sun under umbrellas and sat in their easy chair. The show’s line-up was well balanced, a nice fit between the past and present. Performance wise Jamaica Day Outdoor Reggae Festival delivered and the event was both memorable, thoroughly enjoyable.

Daley says he plans to step up the festival to surpass the previous four years. For the 5th anniversary in 2011, he says will be staging a reunion of all the previous performers save the God Father of Dance Hall, Sugar Minott, who died last week and the King of Rock Steady, Alton Ellis who died in 2009. Build on the concept of a family oriented event, things Jamaica, was in full effect as the vendors sold Jamaican flags, head bands, cotton candy, and Grace Coconut water, and roast corn, mouth watering Jerk Chicken, Curry Goat and Escoviech fish dishes along Red Stripe and Heineken beer. There was also the Miss Caribbean Metro Beauty contestant pageant sponsored by Golden Crust bakery from Prince Georges County mall.

Musically, 2010  saw Daley’ formula of combing pioneers,  tried and true musical icons, from Jamaica rich musical history of Ska, Rocksteady, Reggae, 80’ and 90’s Dancehall practitioners with contemporary  dancehall.  With Half Pint, whose music is the perfect bridge between contemporary dancehall and Shabba Ranks/Yellow-man/ Tiger/Admiral Bailey era dancehall, this year Daly took the concept further by adding an act, who’s riding the success internationally in the mainstream press, dance halls most successful contemporary cross over acts, the turbo-charged Serani. This worked for the teenagers and 20somethings.

Daley’s event is one many Jamaican-music oriented festivals in the United states and Europe that has not been adversely affected by the jailing, visa revocations and banning affecting Jamaican artists worldwide. New York’s IRIE JAMBOREE, arguably the biggest reggae festival on the east coast was reportedly officially cancelled for 2010.

When I arrived at the fairgrounds about 4:45pm, the Baltimore based female led band, Strikers Posse was matching the sun heat on the stage.  Reggaephiles please, do not sleep on this band, they are a tough outfit. Not because they are veterans, the Lady I-chell led posse is part of the female wave establishing their place on the reggae music landscape. The venue was peopled by local area celebrities and industry type like; 1960’s Rock steady group, the Cables, known for their hit “ Baby Bay Why, (oh why ,why did you leave me) bass player Earl ‘Bagga’ Walker, from Freddie McGregor’s Studio One band, Darien Green, owner of Zanzibar on the Waterfront,  one DC’s premier night clubs, Derrick Scott, from the Jamaica Embassy, Veteran National Public Radio professional and media consultant, Sidney White, Mark Mc Farlane, owner of Lanham’s Paradise Cove Caribbean restaurant, concert promoter and owner of Jamaica Jamaica restaurant in Herndon, Virginia Simone Jarret, Helen Morgan,  manager of South Florida reggae artist Kehv, the Prince of reggae Soul and Rosie Parks from Peppy Promotions.

Up next was vocalist Tony Roy, who recently Launce his latest CD, he did a nice set.  The Baltimore based JahWorks band followed Roy. They delivered a fine roots and culture segment to an appreciative crowd. The New Kingston Band out of Brooklyn New York Up next on the band stand. They delivered a solid set before the MC introduced crowd favorite. Festival song winner Tinga Stewart, (his second appearance on this event) fresh from a smash performance recently in Japan, hit the stage and the crowd surged forward immediately. Tinga drew the old R& B classic Percy Sledge ‘Take Time to Know’, and came home with his festival song hit ‘Play De Music’  When he touched ‘Nuh Weh Nuh Betta Dan Yaad,” the Jamaicans in the audience, as if nostalgic, literally came alive.

However, when the voice from the speakers rang out the dancehall anthem “Greetings I bring from jah, to all ragamuffins”, and Half Pint emerged front stage, the crowd erupted.  Ever fit and always ready to deliver, Pint was in his usual vocally fit form as he gave a “Teck Di Show” performance. He reeled of his dominant hits from the 1980’s and 90’s. Pint informed his girl, ((oh no,Iam not your) ‘Substitute Lover’  to ‘Winsome’, (rerecorded by The Mick Jagger & the Rolling Stones on their platinum selling album ‘Goat Head Soup’) his promiscuous lover he warns ( girl yu too, gurl yu too rude, every man a strete yu see yu waan fi use,once yu sey I am yu one an’ only… now tonite yu dey wit mike, tomorrow nite, sey yu gone wid Paul, sey yu havin a baal,soon of de shelf yu soon fall) then he plead for unity on ‘One Big Family.’   On ‘Victory’ Pint feels that a victory for you and me is the answer, but if the bad man  ‘Level the Vibes’  by stopping senseless gun violence.  To ‘Mr. Landlord’ Pint implored ‘(ease up…. missa lan’laawd, mi caan tek de pressha ina mi yaad)’ and on ‘Political Fliction’ he begs Jamaicans to stop political tribalism. A relevant warning given the recent Dudas situation on the island. These songs are as relevant today and as popular as they were back in the day. Pint had a captive crowd singing along with him. He showed why he is still a force to be recon within the reggae dance hall.

Next up was Tanya Stephens, the lone female on the bill.  With her unassuming and laid back style, (critics say she lacks stage presence) Tanya delivered her usual lyrically thought-provoking set.  At one point after kicking off her high heels, as though to ‘bruk wey’ and become more engaging with the audience but this was not be, as she told the audience that “mi naah dance fi unno tonite.”

She drew songs from her repertoire of early dancehall singles like’ Draw Fi Mi finga, ‘ Yu Ready Fi Dis Yet’  ‘ Big  Ninja Bike’ ‘ It’s a Pity’ and from her ground breaking albums “ Gangsta Blues and ‘Rebelution’ and the audience loved her, which is what matters. She told her stories; to the men with lipstick stains at 3’o’clock in the morning facing double trouble behind the door, she scolded (talk up) ‘What’s your story’ as she wanted to know (wha coudda be, more dan me.) On ‘Can’t Breathe’ ,she rehashes the ruminations of a scorned woman,  but cautioned the females not to take her literally, Stephens waxes  philosophically on ‘What a Day’ , as she chides her man  ‘Pon De Corner’ that  (dese streets don’t love you like I do, yu need fi kno dat). On ‘To the Rescue’ she advise males to ( run wey de gal dem wey a stress yu’…) then she chides  females who (want to search de man dem phone and lock of de pun-nash) that there is always a woman waiting  (to perform a save roun ere) Tanya never let males forget that at the end  it’s all about the ‘love de long ding dong’ her favored choice for de ‘ Boom Wuk’ that have her ‘pun-pun’ on stuck’

Freddie McGregor, the man from Miami Florida via Hayes, Clarendon Jamaica who once told me “he’s just likkle Freddie, or Fred Bop, who just love to sing” hit the stage at star time after the hot sun died down. Performing to tracks, (this was my first time in thirty years seeing McGregor performing without a live band. The irony was seeing ‘Bagga’ Walker, from Freddie McGregor’s Studio One band in a wheel chair from a stroke; while ‘Priest’ as Freddie is affectionately called sang to tracks (Freddie said it warmed his heart to see Walker for the first time since his stroke). Freddie handled his set through a few instances when the tracks malfunctioned the way we have come to expect from him, like a seasoned professional, the captain of the “Big Ship’ reeled of several of his many hits; ‘Key To The City’ ‘Push Comes To Shove’ ‘To Be Poor is Crime’ ‘I Was Born a Winner’ ‘Africa’ (here I come), and ‘Jah a de Don.’

Freddie too the time to pay tribute to the late Sugar Minott as he reminded the audience to go out and buy Sugar’s Cd as way to show their appreciation for “ this great icon’s contribution to Jamaican music” Sugar last graced the stage at Jamaica, Jamaica in 2008.McGregor also did a accapella rendition of ‘Brandy’  for the ladies.

The dance hall segment featured the highly anticipated and much awaited performance of Serani, who was surprisingly billed as the show’s headliner and delivered a headliner set.  The sing-jay star has been rising considerably on the international stage over the last two years and, he has kept dance hall/reggae energized. From the moment he hit the stage dancing with his signature chant “it’s its Serani, a bet you never know” he had the audience in frenzy,

Quite popular because of his billboard hit, “No Games”  and his nifty dance moves, Serani  In typical fashion reeled of his hits ‘Stinking Rich’, ‘Mama No Hungry’, Den Nuh like We’, ‘She loves Me.’ With his snappy and high-energy dances routine he bounced about the stage all night. As he did his current monster smash dancehall single ‘Skip to Ma Lu, he took the crowd to another level. The energized teenagers and 20somethings broke loose, singing and dancing along with him. Serani paid respect to his Alliance mates Bounty Killer and Mavado, praise those who took care of their mother, like he does and that he, as dancehall artist was honored to be on the same stage with the veterans on the show.  With his DJ/ Selector cum dancer Biggy, a Big Belly Sky Juice look-alike, who Serani described him as the best dancer out of Jamaica, not named Ding Dong, hyped the crowd with antic and voice tracking.  Serani dared Biggy as he to challenge him to a dance-off with the latest and best dance moves.  Serani sizzling and turbo-charged set closed the night on high point.