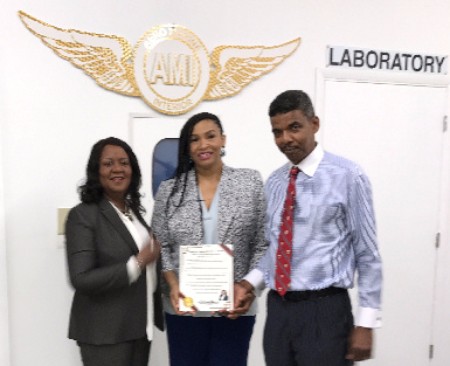 Chris and Jannette Tucker, the founders of Aero Marine Interiors (AMI) , and their staff were recognized for their influence on the industry of aircraft repair and overhaul and the marine interiors business. Florida State Representative Barbara Watson of District 107 presented the duo with a proclamation, stating that small and minority-owned businesses are key to local North Dade County economic growth and to the area’s livability. Watson praised Aero Marine Interiors, noting that as a former small business owner, she understood the level of commitment it takes to work toward entrepreneurial goals.

The Tuckers made the decision to work for themselves 17 years ago, knowing full well the challenges and sacrifices that would be necessary to succeed. Before establishing AMI, the couple pursued an 18-month venture specifically to receive the funding to create another company located between Miami Gardens and North Miami Beach.

Jannette Tucker is a business graduate who previously held a position at a large health insurance company, while Chris Tucker trained and work in the aviation industry for over 20 years. They saved their money and ultimately had enough to establish a repair station that was certified by the FAA in Miami. After eight months, they secured their first contract with a major chartered airline to repair crew seats. Following this initial contract, the business momentum grew. Chris credits a clear delineation of roles for the couple’s success, along with a total reliance on their Christian faith.

Over its 17 years n business, AMI has employed over 175 technicians from ten different nations who speak seven different languages. The firm has serviced the aircraft of companies like Delta, Air Canada, United and American Airlines. The firm recently expanded its services to include a window repair shop and a non-destructive testing facility for aircraft that allows the Tuckers to move into non-aviation markets.

At AMI, the Tuckers have fostered a culture of family among the workers in their 14,000-square-foot facility. AMI also gives back to the community by offering a mentorship and apprentice youth program. The Tuckers’ proudest achievements involved the chance to refurbish campaign aircraft for two presidential candidates in two separate elections, and to service aircraft from several famous celebrities.

In 2017, the goal of the Tuckers is to develop the new non-destructive testing services. They see great potential for the continuing growth in this area as safety is a major concern for the industry.