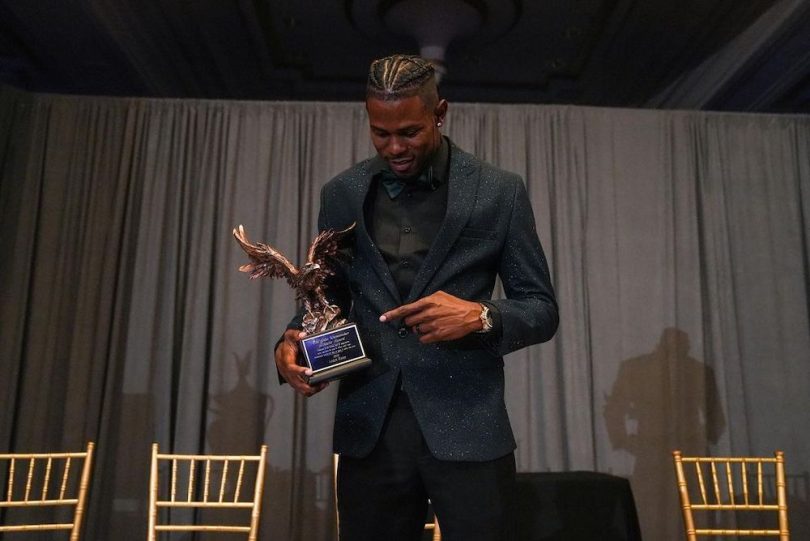 Jamaican Andre Blake, goalkeeper for the Philadelphia Union, made history with his latest win of the Allstate Major League Soccer (MLS) Goalkeeper of the Year award of 2022. This is the third time he has won the title, the first player in the history of the MLS to do so. Blake was previously named Goalkeeper of the Year in 2016 and 2020.

In addition to winning the 2022 goalkeeper award, Blake also led the Philadelphia Union to the rank of top seed in the Eastern Conference for the year. He played every minute for his team in the recent season, capturing 15 clean sheets and permitting just 26 goals, the fewest of any regular starting goalkeeper.

Blake, 31, accrued 15 shutouts, the highest total in the league, and had a 79.4 save percentage, the largest among the goalkeepers who appeared in at least three matches in 2022. The contributions of Blake allowed the Union to concede the fewest number of goals among MLS teams in the 34-game season. This gave the team the Eastern Conference Number 1 seed at the Audi 2022 MLS Cup Playoffs and an undefeated record at home with 12 wins and no losses. Blake earned the MLS All-Star designation for the fourth time in the recent season and won the John Wanamaker Athletic Award for 2022 as well. This award is given to the athlete, team, or organization that has made the greatest contribution toward reflecting credit on Philadelphia and the team/sport in which they excel. Andre Blake is the first men’s soccer player to receive this award since it was first presented in 1961.

Andre Blake was born in May Pen, Jamaica, in 1990. He began his soccer career playing at the University of Connecticut for three years. Between 2011–2013 he appeared 68 times for the Connecticut Huskies and had 37 shutouts. He was named Big East Goalkeeper of the Year in 2011 and 2012 and received the AAC Goalkeeper of the Year title in 2013. He was a semifinalist for the Hermann Trophy in 2013 as well.

He was chosen by the Philadelphia Union first overall in the MLS SuperDraft of 2014, making his first appearance for the team in a friendly against the Montreal Impact. In 2015, he set a record for the Union for saves in a match against the New England Revolution where he achieved ten stops to maintain a 1-1 draw. He was chosen for the 2019 MLS All-Star Game team as the Union’s only representative. In 2020, he received the Golden Glove in the MLS is Back Tournament, a second MLS Goalkeeper of the Year award, and a second selection to the MLS Best XI. In 2021, he extended his contract with the Union through the 2024 season. He debuted for Jamaica’s national team in 2014 against Barbados, a match Jamaica won 2-0. He earned his first medal for Jamaica later in 2014, winning the Caribbean Cup and the Golden Glove award.

The winner of the Allstate MLS Goalkeeper of the Year award is selected by votes from MLS club technical staff, media, and current players. Blake received far more votes than his closest competitors, Djordje Petrovic of New England and Drake Callender of Miami, to win the title