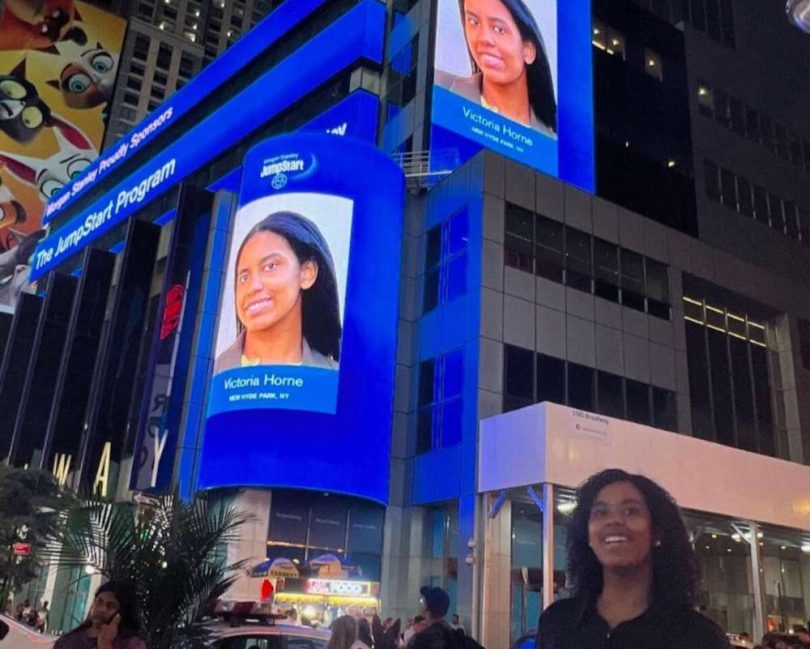 Victoria Horne, who was born in Mandeville, Jamaica, and migrated to New York at the age of 10, has been featured on a billboard for Morgan Stanley in New York City’s Times Square as one of the Capstone Project winners in the company’s Jumpstart Lead program for 2022. Horne won first place in the team Capstone Project after she was tasked with selecting a set of DI companies to serve as passive book-runners and co-managers for the $18.5 billion investment-grade debt offering of Amazon.

Horne, 17, is the daughter of Norman Horne, chair of ARC Manufacturing Limited, and she credited her father for contributing to her success with his support and guidance. According to the Jamaica Observer, Horne said her father gave her valuable insights from his experience as a businessman and owner of a manufacturing company, telling her to focus on the management of her P&L, “to always have an edge and to never give up.”

His support allowed her to develop the resilience she has today, she added, stating that without him, her success would not have been possible. Horne also noted that it was her resilience that resulted in her ultimate success after she was denied entry to other competitive programs she applied for in high school because she had no previous internship experience. Over time, she built up her resume, however, and was able to succeed in the programs she recently completed.

The Jumpstart Lead program from Morgan Stanley is a five-month learning program in the United States that is designed to broaden financial literacy among high school students. It focuses on expanding their knowledge of entrepreneurship, wealth building, global debt markets, mergers and acquisitions, arbitrage, leadership skills, and career development.

Horne said it was “surreal” to see herself on the Times Square billboard and described it as a “once in a lifetime experience” that she never expected to have. She said she was grateful for the experience she gained through the Morgan Stanley program because it taught her several life lessons and gave her the chance to choose a career path. She added that it introduced her to a feeling of teamwork that she had not held previously. This led her to the realization that she wanted to become an investment banker.

Horne, whose next goal is obtaining a Morgan Stanley internship, said she wants high school students to view her as an inspiration and to never stop trying to achieve their goals. She emphasized the importance of resilience as one of the best qualities they can have.