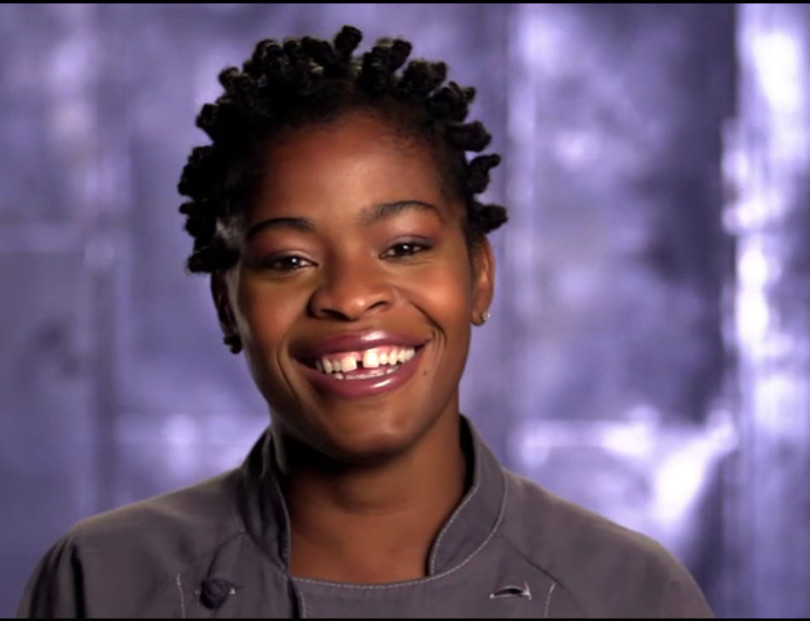 This week we have a conversation with Jamaican Chef & cookbook Author Sian Rose. Born in Sheffield, Jamaica. Sian is a self- taught Chef who has been lucky to share kitchen time with some impressive names. When Sian’s not stirring things up in her own kitchen you can find her moonlighting at Bloomingdales, Aventura in Florida.

How would you define your cuisine?
I cook authentic and some Caribbean inspired food, emphasis on the authentic part. The flavors in my food are the sort of stuff you would find on the road side: street foods, comfort food in your mother or grandmother’s kitchen if you are from the Caribbean, and in a local restaurant.  What sets my food apart is the appearance and the preparation. That’s because I’ve spent a good deal of time cooking in kitchens and learning from gourmet chefs. My food is a little more appealing, pretty. I’m sure that doesn’t sound pretentious. It just doesn’t look as basic as you would find. I think that’s what a lot of Caribbean chefs have feared away from in terms of specializing or featuring Caribbean on their menu. Even they don’t understand it or they just don’t care. Plus there’s that fascination with “farrin” that seems to pervade every society.  Not just the Caribbean.

Tell us some of the qualities that you feel a successful modern chef should have?
I don’t know if there is a cookie-cutter mold for the perfect chef. With that said, I think regardless of what you cook: modern, fusion, authentic, or whatever terms you use. There are so many now a days. But whatever you cook, if you plan to be a successful chef, you better have a command of kitchen basics. And that means you have to be well into the prep. You have to, if you need to jump in and wash some dishes, whatever you need to do to run a successful kitchen. I see so many young cooks that are fresh out of cooking school and their like I don’t do this or I don’t do that. Well, if you plan to make it you’re going to learn very quickly. You better know how to do a little of everything and how it should be done. What would you cook at home if you were just making a laid-back dinner?
When I’m at home, if I’m just making a laid-back dinner cooking for one or cooking for two. Dinner you’re almost always going to find salmon on my plate or some other fish. Other wise, it’s just a plate of veggies or rice or pasta or some other grain. I don’t care much for meat but because of what I do I believe the philosophy that you should taste everything before you put it on a plate. So, I end up consuming more than my fair share. Whenever I get a chance I avoid meat completely.

What are some emerging Caribbean food trends that you’re noticing?
Over the last couple of years I have seen, in and outside of the Caribbean, that some chefs have been promoting their Pan-Caribbean menu in an attempt to highlight certain Caribbean products. Which I admire, but I do wish they would give more attention to the authentic stuff. Millions of people visit the Caribbean in search of authentic Caribbean flavors. With really limited effort on my part, but that’s another story. I’ve been semi-successful and not because there aren’t many chefs who do what I do. The ones who have some prominence ignore the authentic foods and the ones that do feature it haven’t figured out how to put their own spin on it. But I wish that would emerge more. But again, kudos to the ones that are making an effort to feature Caribbean ingredients and highlight Caribbean ingredients on their menus.

What is your favorite show on Food Network?
If I had to choose just 1 it would be Iron Chef. I used to love Paula Deen but, well you know 🙂

What inspires you when you are in the kitchen?
I think it’s more about what being in the kitchen inspires. If I spend enough time in the kitchen I might think of a way to facilitate world peace because cooking frees my mind. It allows me to really solve just about any problem in my head or outside.

What is your favorite Jamaican meal?
I definitely can’t choose just one but, I would never say no to porridge or a good bowl of soup. And definitely, never say no to Ackee and salt fish with a couple slices of dasheen and yellow yam, between dumplings. That’s a must every time.

What’s the weirdest question you have been asked about Jamaican food?
Not so much a question, but a statement. When I launched my business my father, who is a food industry veteran. He was a chef for quiet a few years and had some very prominent jobs in the industry. But, he said to me, “Sian. Rice and peas, and jerk chicken is not going to put you no where.” And that kind of pissed me off and now it amuses me because the fact is rice and peas and jerk chicken put me on the Food Network. So, I mean, take that daddy. It is what it is. I see so many Jamaican chefs who, like I said before, are completely fascinated by “farrin” foods. They use things like fresh produce and meat, free range meat, the sort of things that “farriners” pride. Hopefully that will come and with the right opportunities. I will be part of that education initiative. They have great ingredients in their own backyard and it disappoints me more than just a little bit to see it ignored. Tell us about your cookbook?
Nyammings came about after a couple hundred recipes, a few thousand pictures, and a fairly popular recipe blog. The idea started to form. I would sort out recipes and flirt with whatever. Then I put it in a cookbook, together. Then when Food Network said yes it seemed urgent then. You don’t get the opportunity to be on network and don’t look to capitalize on it. Anyhow, the book, I then decided to make it a reality. So, Nyammings, it’s my baby. It’s a labor of love in so many ways. I was filled with childhood memories while writing that book. I went back to Jamaica jut to recreate things like learning how to bake over wood-fire, and catching fish or waiting for the fisherman on the seaside with my father on the weekends. Like I said, it really was a labor of love writing that cookbook but it also gave me a great deal of insight. The research that went into the book, I gained a lot of insight. But even you find out things like African, Asian, Polynesian, and Indian cultures they have all blended together so seamlessly to make what we know as Caribbean foods. And that, it only speaks more to the diversity of our Caribbean culture.

Jamaican food sometimes is a challenge to outsiders to cook. What would you say to someone who’s totally intimidated cooking Jamaican food?
Jamaican food sometimes is a challenge to outsiders but really my only advice is it’s food. Food is food. And it’s really the seasonings that make cuisine cultural or whatever it is. And that’s another thing that putting Nyammings together really taught me. Whether you cook, roast, fry, bake, or however you prepare your food. Chicken is chicken. It’s just the seasonings that you put on it that dictates what it comes from. Check out my blog: sianscooking.com. Try any recipe there and you will see for yourself. Jamaican cooking is just as easy as anything else. If you can cook Jamaican, Caribbean, whatever, if you can cook. That’s it. It’s food. Being a Jamaican chef do you have any amusing stories to share with us when people discover you are Jamaican?
I mean, someone did offer to sell me a wholesale supply of ganja butter one time. I mean there really isn’t much. I don’t know. It may sound a little uppity to say but maybe it’s the people I associate with. And I don’t really get a real great deal of ignorant questions. People they understand. They have had some sort of exposure to the culture. So that’s that.  And food, again I’ve spent so much time around it that it doesn’t really present a challenge if someone asks me a question I can usually explain it straight away.

I find that Chefs who have studied the culinary arts tend to experiment with fusions. Tell us about some of your Jamaican fusion recipes?
Some of my more popular recipes are the mango habanero or scotch bonnet. Mango habanero just sounds prettier but it started out as mango nectar oil, down scotch bonnet pepper. But the mango habanero sauce, the guava sauce, those are Caribbean fusion I guess. You know they are sauces that are used for chicken and the mango sauce can be used for shrimp. The guava is a little bit heavy. Again, the recipes are on the blog and in the cookbook. The Caribbean chicken stew recipe that I just came up with, recently, it’s delicious. Just talking about it I want some. It’s chicken and callaloo boiled down in a pumpkin coconut milk. And it’s just as good as it sounds. Its thick and rich and creamy and luscious and everything. A little bit of excess ingredients and a little bit of excess time and you never know what I could cook up.

A movie you never get tired of watching.…
Love Jones. I’m a sucker for a good love story.

Growing your hero was…
I’ve never been one for hero worship. Inspiration comes and goes in sprits, you know. Bill Clinton, I came up in the Bill Clinton era. What’s not to love about Bill and Hilary? Bill Gates, the first time I heard the name Bill Gates it was because this man had dropped out of Harvard and become the richest man in the world. I’m not so motivated by being one of the richest people in the world but just to know that a college degree is not necessarily part of the blueprint for a successful career. You can be ok to nothing. You can be a nurse, an agent, successful at whatever and you don’t have to go the traditional route. So I don’t really have heroes per say.

Thanks for your time. Any closing words?
I am food obsessed. I love plane tickets. I love travel and that’s it. I love food and plane tickets…lol