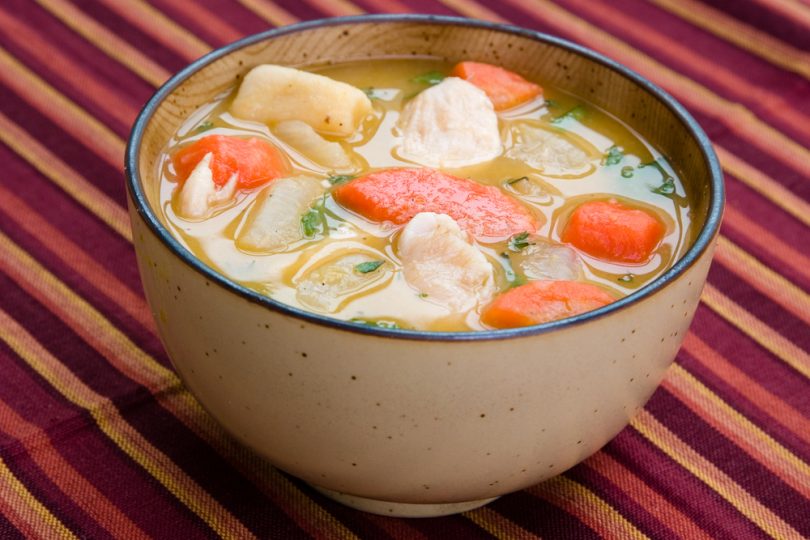 Business Insider magazine asked several Michelin-starred chefs to name their favorite winter soup recipes, and Chef Gerald Addison of the recently opened Washington DC restaurant Bammy’s said he enjoys making the “really hearty and really spicy” Jamaican Chicken Soup in the winter. He told Business Insider that he believes this soup is the best of all the chicken soups he has tried. Addison recommended using chicken feet or wings in the soup, together with chicken stock, pumpkin, and butternut squash. Jamaican Chicken Soup often includes yams, rings of corn-on-the-cob, and chayote – “tons of vegetables” – he added.

The other top chefs shared these favorite easy soup recipes.

Curtis Stone of the restaurant Maude and Gwen in Los Angeles favors a Roasted Beet Soup, which is creamier than a traditional borscht. He roasts the beets with onions and garlic, purees it with some vegetable or mushroom stock, and finishes it with yogurt and chives.

Andrew Zimmerman, the executive chef of Sepia in Chicago, also likes to make a Roasted Beet Soup. His version builds on a potato-leek soup concept, but rather than use potatoes, roasted beets are added. The soup gets “sweet and earthy” from the beets, he said, and the leeks give it some “backbone and structure.” He recommends serving the soup with toasted country bread with melted cheese.

Zimmerman also enjoys making a pumpkin and coconut soup with Thai red curry. The ingredients include a pumpkin, kabocha, or butternut squash, garlic, ginger, coconut milk, and Thai red curry past. This is a creamy and rich soup with just the right amount of spiciness. He also adds spicy cashews, crushed cashews or chili roasted peanuts.

Executive chef Mazen Mustafa of Fellow in Los Angeles makes a squash soup with red kuri squash. This squash has a delicate flavor, he said, and the addition of toasted pumpkin seeds provide an excellent texture. The soup is made with a peeled, deseeded, and diced red kuri squash, garlic, ginger, and a Honeycrisp apple. Any winter squash can substitute for the red kuri if it is not available, with butternut squash a good choice. The soup also includes vegetable stock and red miso. It is served with a topping of toasted pumpkin seeds.

Kevin Meehan of Kali Restaurant in Los Angeles makes a Tahitian Squash Soup when temperatures drop in winter. It is made with sage, thyme, and rosemary, onions, and garlic. White wine is added, then the squash, cream and milk. Nutmeg is added to taste before serving.

For the simplest of winter soups, Val Cantu, head chef at Californios in San Francisco recommends chicken stock. He takes a whole chicken, cuts it up so it cooks completely, and covers it with filtered water. After skimming off the “impurities,” he just adds salt so he can use the stock in other recipes. He often uses the stock in place of water to cook rice, and he also enjoys drinking the stock on its own. “I love it, it feels like a warm sweater,” he told Business Insider.

Daniel Boulud of Le Cirque has been making his favorite curried cauliflower and apple soup since 1989. This soup is made of chicken stock, onions, Madras curry powder, saffron, sliced apples, cauliflower, and cream. It is topped with minced chives and raw apple slices when served.

Jean-Philippe Blondet, executive chef of Alain Ducasse at The Dorchester in London,believes that his personal favorite, Chestnut Velouté, is the “king of soups.” It is a delicate, creamy and warming soup that is made by cooking chestnuts in olive oil and butter, adding garlic and dry fennel, and covering the chestnuts with brandy after they are finished roasting in the oven. A sauce made with roux and a light stock is added, and he recommends using one leg of a guinea fowl as well. It is served with roasted chestnuts, French parsley, and crème fraîche.

Beverly Kim of Parachute in Chicago, enjoys making the spicy Korean beef soup called Yukgaejang. This comforting soup is made with shredded beef brisket and lots of vegetables, including big pieces of scallion. She finishes the soup with an egg and described it to Business Insider as “kind of spicy, super heart-warming, and very soul-satisfying.”