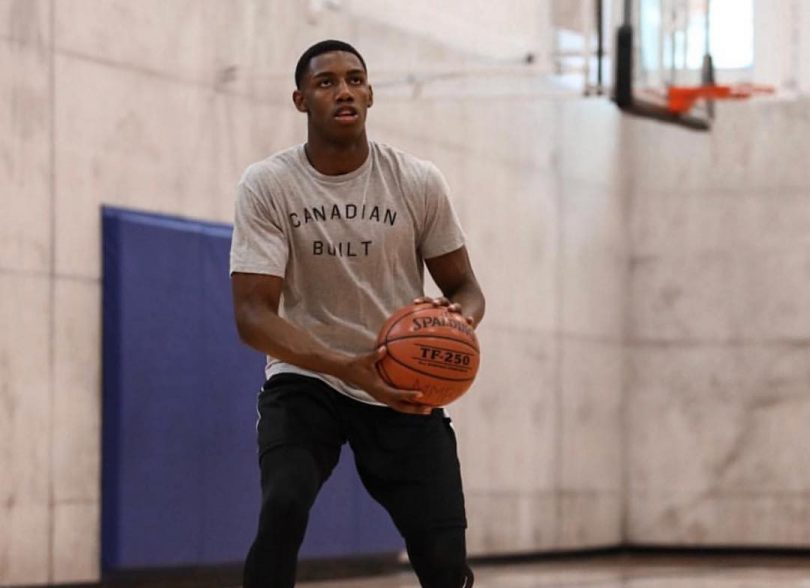 R.J. Barrett, 19, a basketball player of Jamaican descent, was the Number 3 draft pick of the New York Knicks. Barrett was born in Toronto, Ontario, Canada, in 2000 to Jamaican parents Kesha Duhaney and Rowan Barrett, a former basketball player. His father (born to Jamaican parents) played for a long time on the Canadian national team and was captain of the team for the Summer Olympics in 2000. Later, the senior Rowan Barrett was executive vice president and assistant general manager for the Canada Basketball organization. R.J. Barret is the godson of Steve Nash, who was inducted into the Basketball Hall of Fame and played with his father on Canada’s national team. R. J. Barrett’s mother comes from Brooklyn, New York and was a nationally ranked sprinter and long jumper at St. John’s University prior to working for the Canadian Imperial Bank of Commerce. His parents met when they were both students at St. John’s University. Dahlia Duhaney, his maternal aunt, was on Jamaica’s 4×100-meter relay team, which won gold at the 1991 IAAF World Championships. Additionally, his maternal grandparents were members of Jamaica’s national track team, and his uncle played for the University of Maryland’s football team.

Barrett’s interest in basketball developed early in his life. He played with a min-hoop when his father played professionally in France. Barrett went to a French school, but learned English from his mother. Because his father’s career required the family to move many times, he lived in numerous different countries and played basketball with the clubs his father belonged to. The family settled in Ontario in 2008 after his father left professional basketball.

At age 12 R.J. who’s first name is, Rowan Alexander, was considered one of the best players in his group b the Ontario Basketball Association, and he trained with the Canada Basketball junior academy, competing for the Ontario provincial team. He attended St. Marcellinus High School in Ontario and Montverde Academy in Montverde, Florida. While playing with the Canadian national under-19 team, R.J. Barrett was named MVP at the FIFA Under-19 Basketball World Cup in 2017 when he led the team to a gold-medal victory. His senior team debut came during the qualification for the FIFA World Cup in 2019. Barret was a five-star recruit and one of the top recruits in 2018 when he was named Naismith Prep Player of the Year and Gatorade National Player of the Year in his final season in high school. In his college career, he played for the Duke Blue Devils with Zion Williamson and Cam Reddish.

Barrett was hoping he would be drafted by the Knicks in 2019 and said that he was not planning to meet with any other team. He told reporters that he would love for the Knicks to take him because New York is where his mother grew up, and he had been there many times. It is the place he wants to be. He also noted that he had already formed a relationship with the Knicks coach David Fizdale. Off Fizdale Barrett said, “He was at the workout just now. He’s a great guy. I love him.”

The New Orleans Pelicans had the No. 1 overall pick and selected Zion Williamson from Duke. With the No. 2 pick, the Memphis Grizzlies selected Ja Morant from Murray State. The New York Knicks had the No. 3 pick and chose R.J. Barrett, also of Duke.
Photo source: RJ Barrett Instagram