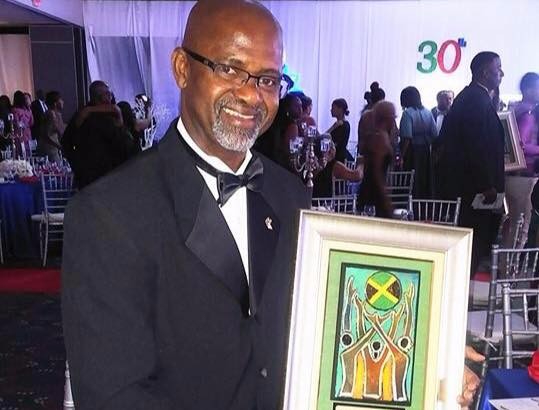 Irwine Clare, the founder, and CEO of Team Jamaica Bickle (TJB), a nonprofit organization based in New York, has received the Global Spotlight Award from the American Chamber of Commerce of Jamaica (AMCHAM). The award was presented at the seventh annual Business and Civic Leadership Awards Gala and celebration of the group’s 30th anniversary, which was held at the Jamaica Pegasus Hotel. The yearly Gala event recognizes businesses, people, and nonprofits that drive and achieve economic and social progress in Jamaica by providing ethical leadership, stewardship, and community building efforts. The Global Spotlight Award was presented to Clare by AMCHAM to honor the work he has done for Jamaica and for Jamaicans in the Diaspora. Irwine Clare with his AMCHAM Award

TJB, the US-based entity headed by Clare, helps athletes, coaches, and officials from Jamaica and other Caribbean nations participating in the Penn Relays, an event held in Philadelphia, Pennsylvania, every year. TJB, which was launched 23 years ago, has raised over US$2.5 million to support athletes and sports programs in Jamaica. TJB is the first Caribbean organization to act as a participating sponsor at the Penn Relays.

In addition to his work at TJB, Clare co-founded Caribbean Immigrant Services (CIS) Incorporated in 1995 and serves as its managing director. CIS seeks to mobilize and empower the Caribbean Diaspora, and since its inception, it has provided aid to thousands of Caribbean nationals, successfully helping them to attain citizenship and voting rights in the US.