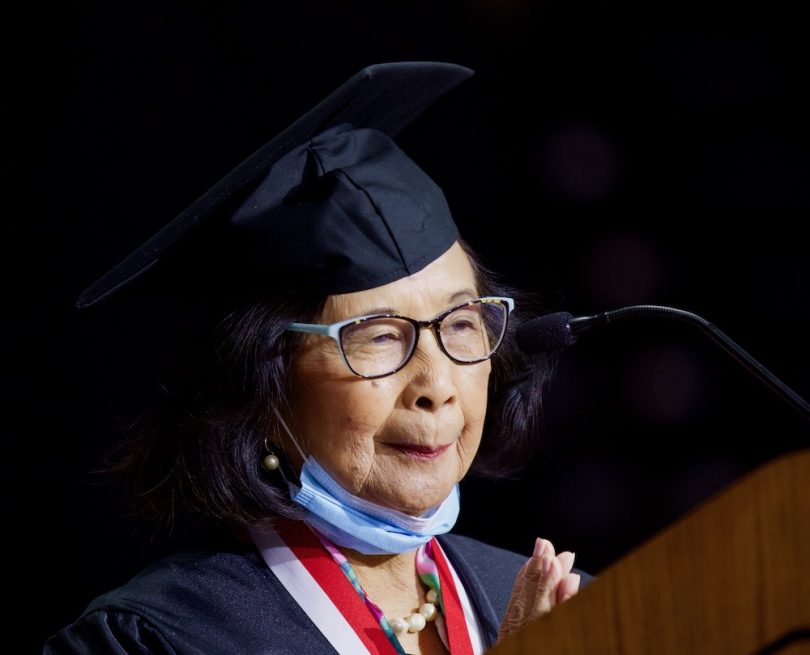 Patricia “Miss Pat” Chin, the co-founder and president of VP Records, a pioneer in the reggae music industry, and an example of immigrant success, is the recipient of the first Presidential Medal presented by York College. She was honored for her influence and contribution to the promotion of Jamaican reggae to the world on June 2, 2022, at the Guy Brewer campus in Queens, New York.

Dr. Berenecea Johnson Eanes, the president of York College, presented the medal to Chin in honor of her successful immigrant story, her business skills, and the contributions she has made to the Jamaica Queens and Caribbean American, Chinese Jamaican Communities. Eanes said she was pleased to have the chance to present the College’s first Presidential Medal in the school’s history and made particular mention of the persistence and dedication required of Chin to ensure that reggae was properly recognized in the music industry and the world.

Pat Chin and her husband Vincent started out at Randy’s Record Mart in Kingston, Jamaica, reselling used records in the 1950s. They eventually became two of the first people to produce, manufacture, and sell recordings of local artists to Jamaican audiences. These artists included the likes of John Holt, Alton Ellis, and Lord Creator.

In the beginning, Vincent Chin worked for Isaac Issa, putting new records into jukeboxes and gathering up those he removed. This was the start of what would become one of the biggest and most successful reggae record firms in the world. In 1968, the couple launched “Studio 17,” which would go on to be one of the top studios in Jamaica. Among those who recorded there were Bob Marley and The Wailers, PeterTosh, The Heptones, Dennis Brown, Gregory Isaacs, and Burning Spear. Two decades after starting the business, Pat and Vincent Chin decided to move to New York City. They established a small store in Queens and continued to be successful in promoting and marketing reggae music.

Upon receiving the award, Miss Pat said her love of music and community brought her to her career as a promoter and distributor of reggae. She said that her years in business taught her not to be afraid of asking for help when she needed it and to never give up because patience and hard work will always provide a way forward. She encouraged the students at York College to enjoy wherever their careers may take them.

York College is a senior college of the City University of New York that offers the features of a major university, including a distinguished faculty and strong pre-professional programs, along with individualized attention for students and a strong sense of community.