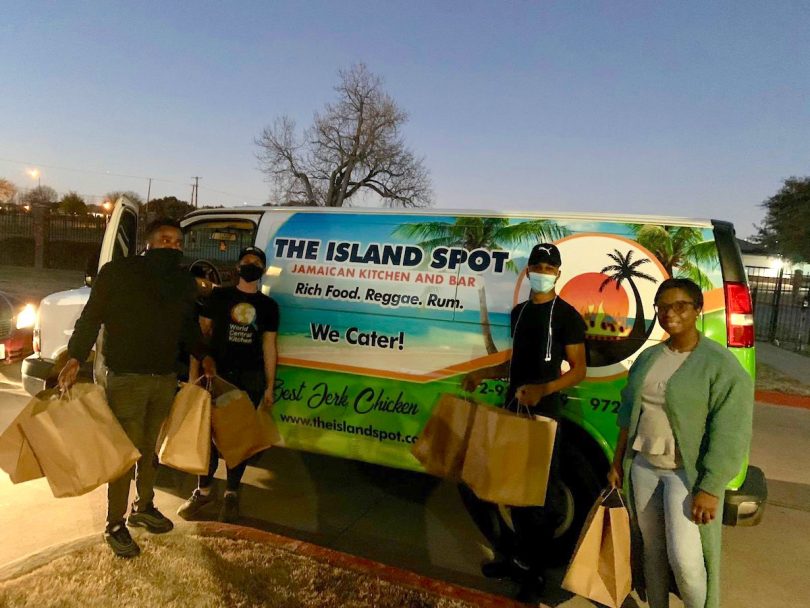 The Island Spot, a Jamaican restaurant in Dallas, Texas, provided meals to citizens in the city who had lost electrical power and access to water because of the historic snowstorm and freezing weather conditions, as well as the individuals working to get the power and water utilities back in service again. The restaurant provided the meals in partnership with World Central Kitchen (WCK), the organization founded in 2010 by renowned Chef José Andrés in order to deliver meals to people around the world suffering from food and water insecurity arising from natural disasters. WCK Relief Teams worked throughout Texas, bringing much-needed meals to people in Austin, San Antonio, Fort Worth, as well as Dallas as the weather emergency continued.

The Island Spot, owned by Jamaican native Richard Thomas, offers authentic Jamaican cuisine and works to exemplify the island’s national motto Of “Out of Many, One People” by serving his culturally diverse community.

Thomas opened his original Island Spot restaurant in Carrollton in 2010 and then expanded to Oak Cliff. The Island Spot restaurant gets its inspiration from Mama Joyce who made delicious food for her family, including seasonal fresh fruit juices from the family’s trees. The restaurant uses Mama Joyce’s own recipes as the basis for all of its dishes, and its decor includes personal family portraits and photos of the family’s favorite places in Jamaica. The island ambiance is emphasized by the music that plays there, including selections by reggae icon Bob Marley, the energetic Byron Lee and the Dragonaires, and the sound of steel drums.

The new restaurant includes many features aimed at providing an atmosphere of Jamaican authenticity such as a wood-fire grill on which to cook his signature jerk chicken. He uses traditional pimento wood and smoke techniques similar to those used in Jamaica at the Boston Bay Jerk Center, which is cited as the home of jerk chicken.

The Island Spot in Oak Cliff features an upstairs-downstairs design with a dining room, patio, and rum bar that Thomas calls “the official Rum Bar destination” for the Dallas-Fort Worth area. Over 25 unique Caribbean rums, rum flights, and specialty cocktails are on offer at the bar.

Sunday Brunch offers a menu with items separate from its daily offerings to give diners the chance to enjoy a Jamaican slant on the concept of brunch. Occasional live reggae music is also featured at the brunch.