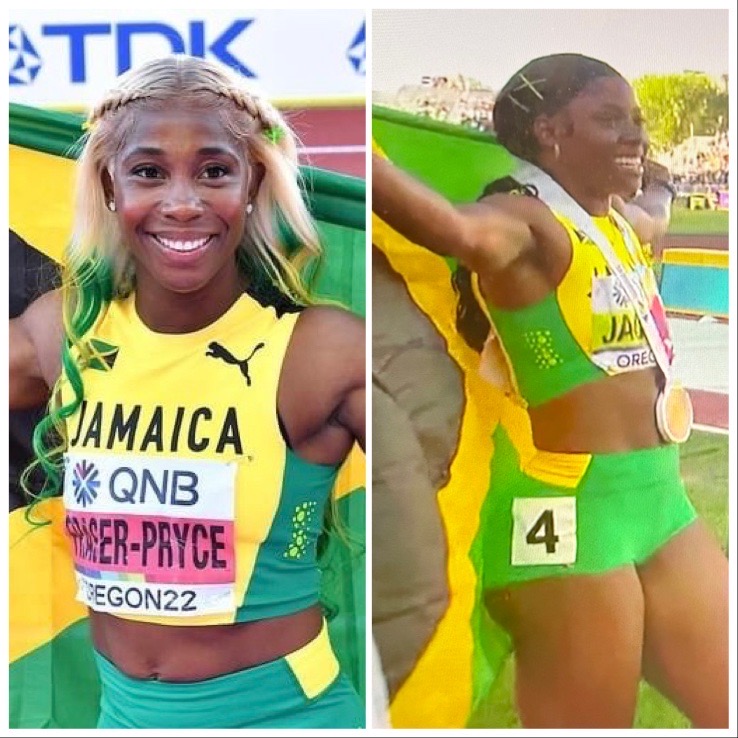 Jamaicans Shelly-Ann Fraser-Pryce and Shericka Jackson have been included on the short list of athletes being considered for the title of Female Athlete of the Year by World Athletics for 2022. Fraser-Pryce, 35, achieved a historic first in 2021 when she became the oldest female athlete to win a sprint title. Jackson, 28, was awarded her first international individual sprint title with a world-record time of 21.45 seconds in the 200-meter event at the 2022 World Championships in Eugene, Oregon, putting her in second place on the world’s all-time record list. She won the 200-meter title at the Diamond League competition as well.

In addition to her historic feat in 2021, Fraser-Pryce also won her fifth 100-meter World title, making her the first runner to take home five titles in the history of the World Championships since 1983 when the competition began. She also won her fifth Diamond League trophy at the Zurich tournament. Fraser-Pryce, who is known as “Mommy Rocket,’ ran a world-leading 10.62 seconds in the 100 meters in this year’s season, which was one of her record-setting seven sub-10.70 100-meter races of the season.

Shaunae Miller-Uibo of the Bahamas joined the two Jamaicans on the shortlist of 2022 nominees representing the Caribbean region. She won the 400-meter World Indoor Title in March, the World 400-meter title in July, and the NACAC title in August.

The other athletes in the running for the coveted Athlete of the Year award include Tobi Amusan of Nigeria, who holds the 100-meter hurdles world record; World Shot Putt record holder Chase Ealy of the United States, and Sydney Mclaughlin, the 400-meter record holder, also of the US; Kimberly Garcia of Peru, who is the world 20-kilometer race champion; the world’s 1500-meter champion from Kenya, Faith Kipyegon; world triple-jump champion Yulimar Rojas of Venezuela; and world high-jump silver medalist Yaroslava Mahuchikh of Ukraine.

Following the end of voting, five female and five male athletes will be announced as the finalists by World Athletics, with the winners revealed in early December 2022 on World Athletics’ social media platforms.