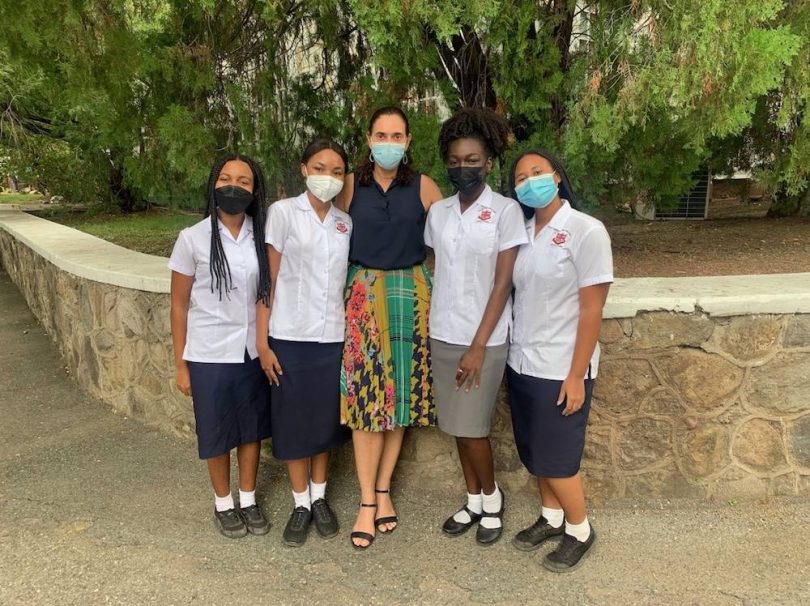 The all-girls Team Viridis from Jamaica, comprising four friends from Campion College, beat 650 teams from 515 schools in 113 countries and territories around the globe to become one of the three runners-up for the 2022 Earth Prize, an environmental sustainability competition that invites young people between the ages of 13 and 19 worldwide to “Solve the Unthinkable.” Team Viridis was the top team in the Americas and Western Hemisphere and the only champion team from the Caribbean. In addition to winning a $25,000 prize for their school, the four team members received Fellowships to Switzerland and will serve as Mentors for The Earth Prize.

The award was presented on March 25, 2022, at a virtual awards ceremony hosted by Angela McCarthy, CEO of The Earth Foundation; Peter McGarry, founder of The Earth Foundation; Rina Kupferschmid-Rojas, Chair of The Adjudicating Panel; Mario Salomone, Director General of the World Environmental Education Congress (WEEC); and Kisum Chan, a member of The Adjudicating Panel and one of the young change-makers featured in The Earth Prize learning videos, among others.

In its contest submission, Team Viridis contrasted the memories of Jamaica enjoyed by their elders of cold Christmas mornings, numerous fluttering swallowtail butterflies, and endless sandy beach with the memories of younger Jamaicans of schools closing because of pollution from landfills, pleas for school uniforms more in keeping with the rising heat, and news stories about eroding roadways.

In part, the entry read, “ Like many other young islanders, every day we see the landmass of our country grow smaller and smaller, and in turn, we see our supposedly ‘bright’ futures grow into a climate dystopia.” The realization that about one-quarter of all air emissions stem from the agricultural industry and that methane, a potent greenhouse gas produced by rotting food waste, represents one of the major culprits, served as the team’s inspiration.

Therefore, the innovative solution developed by Team Viridis involves a mobile application that makes it easy to distribute superficially imperfect foods and those that are past their “use by” dates to people who would benefit from having access to less costly food products. Another benefit of the app is that it would reduce the amount of overall food waste in Jamaica.

Each member of Team Viridis actively participated in school groups and local environmental NGOs, including Clean Up or Act, and they knew that no one was addressing food waste in Jamaica. Therefore, they were convinced this would be a useful and popular tool for the island’s local population. The team also knew that the app had to be user-friendly and convenient to use if it was to become a sustainable solution for consumers and supermarkets. Each team member brought her own passions and interest to the project, and they succeeded in making their point, winning a prestigious prize, and making their country proud.