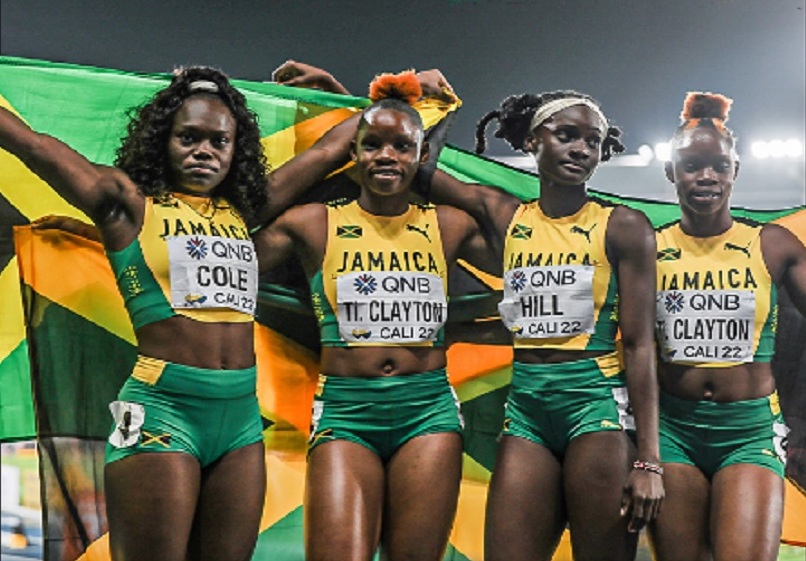 Jamaica’s Under-10 women’s 4×100-meter relay team of Serena Cole, Tina Clayton, Kerrica Hill, and Tia Clayton achieved a new world record in the World Athletics championships on August 5, 2022, in Cali, Colombia. Their gold-medal-winning time of 42.59 seconds was finally ratified by World Athletics on January 16, 2023. The same four team members set the record with 42.94 seconds a year earlier at the championships in Nairobi, Kenya.

The announced ratification was received with relief by Jamaica after a faster time had been set with a team comprising three of the 2022 members but with Brianna Lyston running instead of Kerrica Hill with a time of 42.58 seconds for the gold medal at the CARIFTA Games in April 2022 was not ratified. According to World Athletics, that time could not be recognized as a record as only three of the four members of the team had undergone testing by Jamaica’s drug testing authorities.

Teams representing Jamaica are currently placed at five of the top nine positions on the performance list of World Athletics, and 42.58 seconds remains the fastest time. This time is followed by the time clocked in Cali, and the time achieved in Nairobi occupies the third-fastest spot.

Serena Cole of Edwin Allen High School, who had won two medals at the World U20 championships in Calif in 2022, achieved a double win at the 29th staging of the Purewater/JC/R Danny Williams Invitational Track and Field Development Meet at Jamaica College on January 7, 2023. She had the fastest time of the day in the Girls’ Class One 100-meter event with 11.58 seconds.

In addition to being part of the winning relay team, Tina Clayton of Edwin Allen High School set a new championship record in the 100 meters with a time of 10.95 seconds to win a gold medal at the World U20 championships in Cali in 2022. She was also named international U20 female athlete of the year by Athletics Weekly.

Kerrica Hill won the 100-meter hurdles title in Cali in 2022 with a time of 12.77 seconds, the fastest time in the world for 2022. She was a finalist for the 2022 World Athletics Women’s Rising Star award and turned professional following the championships. She is currently a member of the Elite Performance Track Club.

Tia Clayton, who also attends Edwin Allen, is the twin sister of Tina Clayton and a member of the world-record-setting U20 women’s relay team. She was the first of the twins to take home an individual gold medal at the ISSA/GraceKennedy Boys and Girls Championships.